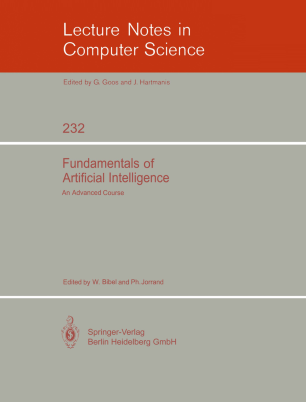 This volume contains the elaborated and harmonized versions of seven lectures given at the first Advanced Course in Artificial Intelligence, held in Vignieu, France, in July 1985. Most of them were written in tutorial form; the book thus provides an extremely valuable guide to the fundamental aspects of AI. In the first part, Delgrande and Mylopoulos discuss the concept of knowledge and its representation. The second part is devoted to the processing of knowledge. The contribution by Huet shows that both computation and inference or deduction are just different aspects of the same phenomenon. The chapter written by Stickel gives a thorough and knowledgeable introduction to the most important aspects of deduction by some form of resolution. The kind of reasoning that is involved in inductive inference problem solving (or programming) from examples, and in learning, is covered by Biermann. The tutorial by Bibel covers the more important forms of knowledge processing that might play a significant role in common sense reasoning. The third part of the book focuses on logic programming and functional programming. Jorrand presents the language FP2, where term rewriting forms the basis for the semantics of both functional and parallel programming. In the last chapter, Shapiro gives an overview of the current state of concurrent PROLOG.