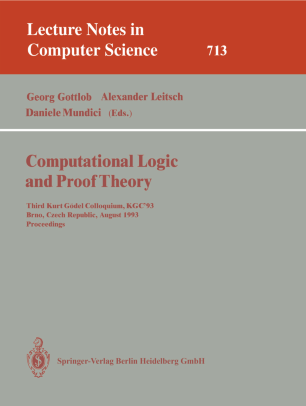 The Third Kurt G|del Symposium, KGC'93, held in Brno, Czech Republic, August1993, is the third in a series of biennial symposia on logic, theoretical computer science, and philosophy of mathematics. The aim of this meeting wasto bring together researchers working in the fields of computational logic and proof theory. While proof theory traditionally is a discipline of mathematical logic, the central activity in computational logic can be foundin computer science. In both disciplines methods were invented which arecrucial to one another. This volume contains the proceedings of the symposium. It contains contributions by 36 authors from 10 different countries. In addition to 10 invited papers there are 26 contributed papers selected from over 50 submissions.