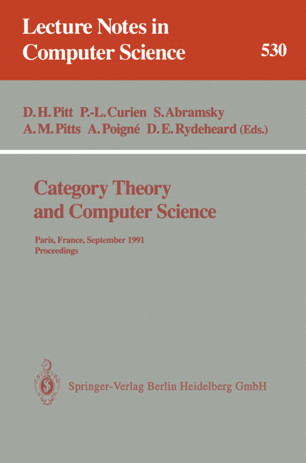 The papers in this volume were presented at the fourth biennial Summer Conference on Category Theory and Computer Science, held in Paris, September3-6, 1991. Category theory continues to be an important tool in foundationalstudies in computer science. It has been widely applied by logicians to get concise interpretations of many logical concepts. Links between logic and computer science have been developed now for over twenty years, notably via the Curry-Howard isomorphism which identifies programs with proofs and types with propositions. The triangle category theory - logic - programming presents a rich world of interconnections. Topics covered in this volume include the following. Type theory: stratification of types and propositions can be discussed in a categorical setting. Domain theory: synthetic domain theory develops domain theory internally in the constructive universe of the effective topos. Linear logic: the reconstruction of logic based on propositions as resources leads to alternatives to traditional syntaxes. The proceedings of the previous three category theory conferences appear as Lecture Notes in Computer Science Volumes 240, 283 and 389.