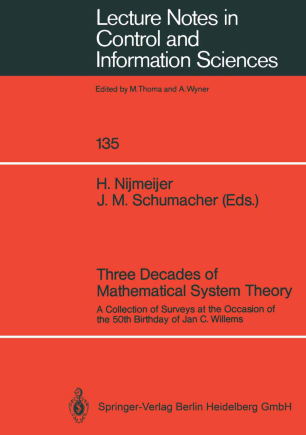 A Collection of Surveys at the Occasion of the 50th Birthday of Jan C. Willems

The field of modern mathematical system theory has its origins in the work of R.E. Kalman in the late fifties. It came to a rapid development in the early sixties, and has seen a continuing and still growing stream of contributions in the years that followed. Today, it stands as a well-established discipline. The volume Three Decades of Mathematical System Theory surveys the developments in this field by presenting 21 articles covering the broad area of system and control theory. All articles have been written by well-known authors, who were invited to give their personal expert view on a particular direction of research. Together, the contributions in this volume review the wide range of mathematical methods that are being applied in modern system and control theory. The mathematical fields that are involved included differential and algebraic geometry, linear and commutative algebra, and functional and stochastic analysis.