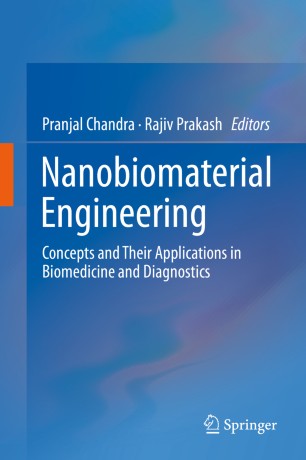 Concepts and Their Applications in Biomedicine and Diagnostics

This book comprehensively documents the application of Nanobiomaterials in the field of bio-medicine and diagnostics technologies by involving classical concepts/examples. Nanobiotechnology is an emerging area which encompasses all the facets of research of nano and biomaterials with their interaction with biological systems. The book summarises design and development of various nanobiomaterials and their composites for diagnostics and therapeutic applications. It skilfully reviews the utilization of the nanomaterials alone or in combination with other bio-molecules as a contrast enhancer in in-vivo imaging, Nano-Theranostics, drug delivery, and sensing transducer matrix. It also discusses the current research on designing of the new Nanobiomaterials and their implementation in numerous fields including bio-medicine and diagnostics. Finally, it summarizes the future prospects and the commercial viability of Nanobiomaterials in the human health care.​

Prof.Rajiv Prakash received his M. Tech. degree in Materials Technology from Institute of Technology, Banaras Hindu University IIT (BHU), Varanasi, India and did his Ph.D. work from Tata Institute of Fundamental Research, Mumbai, India. Presently, he is Professor in the School of Materials Science and Technology, Dean (Research and Development) of the institute, and Professor-in-charge of the Central Instrument Facility. He was also a visiting scientist/professor at the University of Applied Sciences, Germany and Kyushu Institute of Technology, Japan (under DST-JSPS). Before joining IIT (BHU), Varanasi he has served as Scientist in the CSIR laboratory Lucknow, India for more than 7 years. He has been recipients of many awards including Young Scientist Award (Council of Science and Technology), Young Engineer Awards (Indian National academy of Engineering) of India and Materials Society Medal Award of India. He is elected as Academician of Asia Pacific Academy of Materials in 2013. His current research interests include morphology controlled synthesis of electronic polymers, nanocomposites, fabrication and characterization of organic electronic devices, sensors/biosensors, and Nanobioengineering. Till now, he has more than 160 publications in international journals of repute and 20 patents to his credit (out of which two technologies transferred for commercialization). He is on the Editorial Board of several National and International Journals. His interdisciplinary research work has been highly cited and featured on various platforms including nature news. He is the member of various national committees including India Vision Plan 2035 of DST-TIFAC, and “IMPRINT” program of MHRD, Government of India.