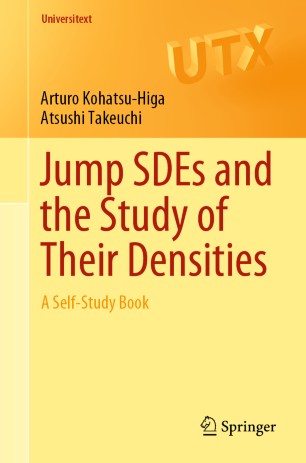 Jump SDEs and the Study of Their Densities

The present book deals with a streamlined presentation of Lévy processes and their densities. It is directed at advanced undergraduates who have already completed a basic probability course. Poisson random variables, exponential random variables, and the introduction of Poisson processes are presented first, followed by the introduction of Poisson random measures in a simple case. With these tools the reader proceeds gradually to compound Poisson processes, finite variation Lévy processes and finally one-dimensional stable cases. This step-by-step  progression guides the reader into the construction and study of the properties of general Lévy processes with no Brownian component. In particular, in each case the corresponding Poisson random measure, the corresponding stochastic integral, and the corresponding stochastic differential equations (SDEs) are provided. The second part of the book introduces the tools of the integration by parts formula for jump processes in basic settings and first gradually provides the integration by parts formula in finite-dimensional spaces and gives a formula in infinite dimensions. These are then applied to stochastic differential equations in order to determine the existence and some properties of their densities. As examples, instances of the calculations of the Greeks in financial models with jumps are shown. The final chapter is devoted to the Boltzmann equation.