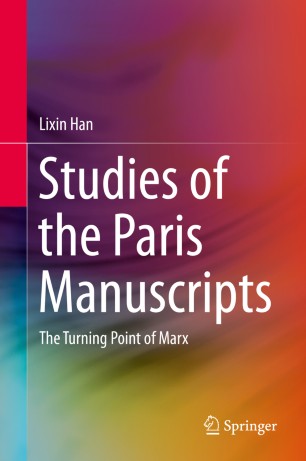 Studies of the Paris Manuscripts

The Turning Point of Marx

This book is devoted to the studies of Karl Marx’s Paris Manuscripts and presents a new interpretation of early Marx, arguing that his transition to maturity can be found in these manuscripts, and specifically in Comments on James Mill, which was drafted between the First Manuscript and the Second Manuscript. In Comments on James Mill, Marx succeeds in transferring his theoretical framework from the isolated individual to the society and establishes his basic goal, i.e., to explicate the nature of humans and society from the perspective of external economic relations, marking the advent of historical materialism.
This study reopens the possibility of interpreting the Paris Manuscripts from the perspective of Hegel. According to the author, it was during the Paris Manuscripts period that Marx shifted his theoretical foundations from Feuerbach to Hegel. On the basis of Hegel’s alienation concept, Marx constructs a new form of alienation theory with “alienation of intercourse” at its core. The theoretical challenge tackled by this book is to restore the authority of alienation theory, and strengthen the position of the Paris Manuscripts in the history of Marx thought, so as to rearrange the traditional landscape of research on early Marx thought.
This interpretation, proposed and published for the first time in the world, could compete with the theses of Louis Althusser and Hiromatsu Wataru, which consider Die deutsche Ideologie to be the turning point of Marx. Further, it represents a significant contribution by a Chinese scholar to the international research on Marx.

Lixin Han (born in 1966, Ph.D. in social sciences at Hitotsubashi University, Japan) is a professor and supervisor of Ph.D. candidates in the Department of Philosophy at Tsinghua University as well as the director of Center for MarxEngelsLiterature Research at Tsinghua University (CMELR). His research concentrates on Marxist philosophy, Hegel Philosophy, ecological Marxism and environmental ethics. Currently, he is charge of several research projects, including: A digital edition of Feuerbach, Die deutsche Ideologie (MEGA② I-5); the interpretation of Marx’s manuscripts; the translation of as well as research on “Japanese Marxism”. Some representatives of his publications are: Ecology and Marx: A Unification of Naturalism and Humanism (in Japanese, 2001); Environmental Axiology, Environmental Ethics: A True Moral Revolution (2005); Studies of the Paris Manuscripts: The Turning Point of Marx (2014). He has also published more than 100 papers in domestic and foreign journals.