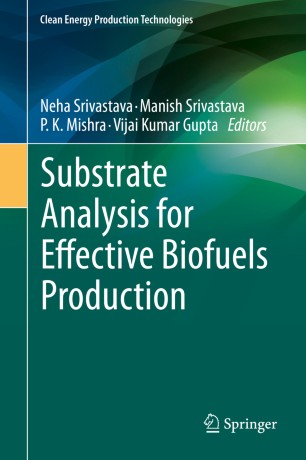 As a substrate, cellulose plays a crucial role in the biomass-based biofuel production process, and is essential to enzyme and sugar production. Accordingly, ensuring maximum availability of cellulose for enzyme production and bioconversion for sugar generation is one of the major challenges for sustainable biofuels production. To date there has been extensive research on biofuel production using lignocellulosic biomass, but there is a huge gap when it comes to the critical analysis of cellulose content, structural feasibility, availability, and economic processing, so that it can be converted for enzyme and fuel production at low cost.
Consequently, this book discusses the availability of lignocellulosic substrate for biofuel production in light of the challenges that the biofuels industry is currently facing. After identifying the major substrate selection challenges for the practical biofuel production process, the book addresses said challenges by focusing on various issues such as: potential substrates that have high cellulosic content, structural feasibility, and low-cost & effective processing to remedy the structural complexity of biomass structure and create added value. In addition, it covers recent advancements in cellulase production and outlines future prospects.
Given its scope, it offers a valuable guide for research students and industry practitioners alike.

Dr. Neha Srivastava: Neha Srivastava is currently working as Post-doctorate fellow in Department of Chemical Engineering and Technology, IIT (BHU) Varanasi, India. She has published 25 research articles in the in peer reviewed journals with 03 patents and have 01 Technology Transfer.  She has been completed her PhD from Department of Molecular and Cellular Engineering, SHIATS, India in 2016 in the area of bioenergy. She has been received 06 Young Scientist Awards. Presently, she is working on biofuels production (Cellulase enzymes; production and enhancement, biohydrogen production from waste biomass, bioethanol production).
Dr. Manish Srivastava: Manish Srivastava is working as DST INSPIRE faculty in the Department of Physics and Astrophysics, University of Delhi, India. He has published 45 research articles in the in peer reviewed journals, authored several book chapters and filed 1 patent. He worked as a post doctorate fellow in the Department of BIN Fusion Technology, Chonbuk National University from August 2012 to August 2013. He was an Assistant Professor in the Department of Physics, DIT School of Engineering, Greater Noida, from July 2011 to July 2012. He received his Ph. D. in Physics from the Motilal Nehru National Institute of Technology, Allahabad, India in 2011. Presently, he is working on the synthesis of graphene based metal oxide hybrids and their applications as catalysts. His area of interest is synthesis of nanostsructured materials and their applications as catalyst for development of electrode materials in energy storage, biosensors and biofuels production.
Professor P.K. Mishra: P.K. Mishra is currently Professor and Head in the Department of Chemical Engineering & Technology, Indian Institute of Technology (BHU), Varanasi, India. He obtained his PhD degree in Chemical Engineering from Institute of Technology (Banaras Hindu University) in 1995. He has authored/co-authored over 60 technical papers published in reputed national/international journals and supervised more than 20 doctoral students. He has received several awards and hounours and has 05 patents with 01 Technology Transfer. He is Fellow of Institution of Engineers India. He has received several awards and honours at National/International levels. He has also made significant contribution towards development of entrepreneurship ecosystem in Eastern part of the country. He is coordinator Technology Business Incubator at the Institute and member Executive committee NISBUD, Ministry of Skill Development, Government of India.
Dr. Vijai Kumar Gupta: Dr. Vijai Kumar Gupta from ERA Chair of Green Chemistry, Department of Chemistry and Biotechnology, School of Science, Tallinn University of Technology, Tallinn, Estonia, is one of the leading experts in the area of microbial biology and biotechnology. He is the member of International Sub-commission on Trichoderma and Hypocrea, Austria; International Society for Fungal Conservation, UK; and Secretary of European Mycological Association. Dr. Gupta is the Fellow of Prestigious- The Linnaean Society, London, UK; Fellow of Indian Mycological Association; and Fellow of Mycological Society of India. He has been honoured with several awards in his career including Indian Young Scientist Award for his advanced research achievements in the field of fungal biology and biotechnology. He is the editor of few leading scientific journals of high repute and having many publications in his hands with h-index 21. He has edited many books for publishers of international renown such as CRC Press, Taylor and Francis, USA; Springer, USA; Elsevier Press, The Netherlands; Nova Science Publisher, USA; DE Gruyter, Germany; and CABI, UK.