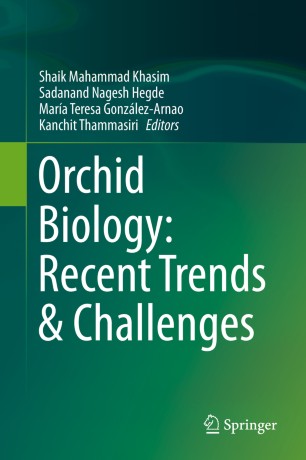 This book on “Orchid Biology: Recent Trends & Challenges” reviews the latest strategies for the preservation and conservation of orchid diversity and orchid germplasm. It is an outcome of the Proceedings of the International Symposium on “Biodiversity of Medicinal Plants & Orchids: Emerging Trends and Challenges” held on 9-11 February 2018 at Acharya Nagarjuna University, India. In addition, eminent orchid experts from around the globe were invited to contribute to this book. All chapters were peer-reviewed by international experts.

The Orchidaceae are one of the largest families of flowering plants, comprising over 700 genera and 22,500 species and contributing roughly 40 percent of monocotyledons. They also represent the second-largest flowering plant family in India, with 1,141 species in 166 genera, and contribute roughly 10% of Indian flora. Orchids comprise a unique group of plants and their flowers are among the most enchanting and exquisite creations of nature.

Phylogenetically and taxonomically, the Orchidaceae are considered to be a highly evolved family among angiosperms. They show incredible diversity in terms of the shape, size and colour of their flowers, and are of great commercial importance in floriculture markets around the globe. Millions of cut flowers of Cymbidium, Dendrobium, Cattleya, Paphiopedilum, Phalaenopsis, Vanda etc., besides potted orchid plants, are sold in Western Countries and thus, the orchid cut flower industry has now become a multimillion-dollar business in Europe, the USA and South East Asia.

Besides their ornamental value, orchids hold tremendous pharmaceutical potential. Root tubers of Habenaria edgeworthii form an important component of the ‘Astavarga’ group of drugs in Ayurvedic medicine. It is an established fact that tubers of some terrestrial orchids have been used to treat diarrhoea, dysentery, intestinal disorders, cough, cold and tuberculosis. Some orchids, particularly those belonging to the genera Aerides, Arachnis, Cattleya, Cymbidium, Dendrobium, Epidendrum, Oncidium, Paphiopedilum, Phalaenopsis, Renanthera, Vanda etc. have been extensively used to produce internationally acclaimed hybrids. Yet paradoxically, Indian orchids are victims of their own beauty and popularity. As a result, their natural populations have been declining rapidly because of unbridled commercial exploitation in India and abroad. In fact, some orchids are now at the verge of extinction, e.g. Renanthera imschootiana, Diplomeris hirsuta, Paphiopedilum fairrieanum, Cypripedium elegans, Taeniophylum andamanicum etc.

Given the global importance of orchids in terms of securing human health and wealth, this comprehensive compilation, prepared by international experts, is highly topical. Its content is divided into five main sections: (I) Cryopreservation & Biotechnology, (II) Orchid Biodiversity & Conservation, (III) Anatomy & Physiology, (IV) Pollination Biology and (V) Orchid Chemicals & Bioactive Compounds. All contributions were written by eminent orchid experts/professors from around the world, making the book a valuable reference guide for all researchers, teachers, orchid enthusiasts, orchid growers and students of biotechnology, botany, pharmaceutical sciences and ethnomedicine. It will be equally valuable for readers from the horticultural industry, especially the orchid industry, agricultural scientists and policymakers.

​Dr. Kanchit Thammasiri, is an associate Professor and Head, Department of Plant Science, Mahidol University, Bangkok (Thailand). He has made significant contribution in the field of Cryopreservation of Thai Orchids seeds and their micropropagation. His current research involves the orchid breeding and micropropagation of selected genera, such as cattleya alliance, dendrobiums, phalaenopsis and vandaceous-type orchids, and cryopreservation of Thai orchids. He published his research papers in National and International Journals, such as CryoLetters, Acta Horticulturae, Science-Asia, Richardia, Lindleyana and, Plant Cell, Tissue and Organ Culture. He is Member of the American Orchid Society, Florida and also International Society for Horticultural Sciences (ISHS), Belgium.

Prof Shaik Mahammad Khasim, is Head, Department of Botany and Microbiology, Acharya Nagarjuna University, India, and formerly chairman, board of studies in Biotechnology. He has made significant contribution in the field of Orchid biology and conservation. He has been working on molecular characterization, biodiversity, micropropagation, ethnomedicine and phytochemistry of orchids. He published good number of research papers in National and International Journals. He is the recipient of the Usha Vij Memorial Award-2018 for his outstanding contribution in orchid biology conferred by The Orchid Society of India (TOSI), Chandigarh. He is an Associate fellow of A.P. Academy of Science (India); Life Member of TOSI, Indian Science Congress Association (Calcutta) and, Member of The American Orchid Society (Florida) and the International Society for Horticultural Science (ISHS), Belgium.

Prof. Maria Teresa González Arnao, is a Professor in Universidad Veracruzana, Veracruz, México since 2004. She has been working on Plant Biotechnology especially in Plant Cryopreservation techniques for last several decades. She has published research papers in National and International journals such as Acta Horticulturae, European Food Research and Technology, HortScience, Cryobiology, Revista Advances en Investigación Agropecuria (AIA), and Journal of Plant Biochemistry & Biotechnology. She also contributed several chapters in technical books published by Springer- Verlag. She is the Member of the International Society for Horticultural Sciences (ISHS), Belgium.

Dr. Sadanand N. Hegde, former Director of Orchid Research & Development Center and State Forest Research Institute, Arunachal Pradesh, (India) has made significant contribution in Orchid taxonomy and conservation.  His initial works were on the Cyto-taxonomic studies on the orchids of Western Ghats of India at the University of Agricultural Sciences, Bangalore and subsequently at the Karnataka University, Dharwad on Cyto and Chemotaxonomic studies in the tribe Epidendreae of Orchidaceae. He explored 600 orchid species from Arunachal Pradesh and registered 8 new species as well. During his tenure as a Director, he developed orchids as a supplemntal crop for the tribal farmers of Arunachal Pradesh and other Nort-Eastern States of India. He registered six new hybrid orchids and bred 16 new hybrids. He is  recipient of Dr. T. N. Khooshoo Memorial Environment Award (2004) conferred by The Orchid Society of India (TOSI). He is also the Founder Member of TOSI, Chandigarh.