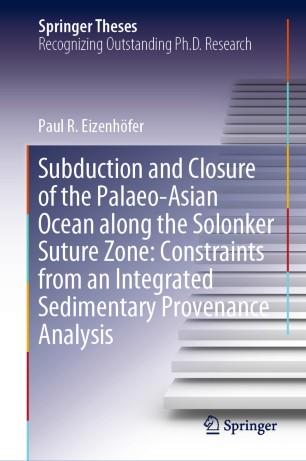 Subduction and Closure of the Palaeo-Asian Ocean along the Solonker Suture Zone: Constraints from an Integrated Sedimentary Provenance Analysis

This Ph.D. thesis attempts to decipher the closure of the Palaeozoic Palaeo-Asian Ocean along the enigmatic Solonker Suture in East Asia adopting a methodology that integrates geochemical and geochronological data from Palaeozoic sedimentary and volcanic rocks in the region. It provides an in-detail but also broad insight into the Palaeozoic to early Mesozoic tectonic evolution of the region, not only pin-pointing the debated location of the Solonker Suture but also the timing of final disappearance of the Palaeo-Asian Ocean during Permian to Early Triassic times. The results have led to propose a tectonic ‘soft-collision’ model for the amalgamation of the North China Craton and the Mongolian Terranes in northern Asia explaining the general absence of geologic features characteristic for continent-continent collisions such as the occurrence of regional-scale high-grade metamorphic rocks, ophiolite belts and fold-thrust structures. This new model may serve as a blueprint for the tectonic evolution of similar suture zones that are characterized by the absence of typical collision related lithologies and structures. The thesis is particularly useful as a guide for researchers who seek an in-depth understanding of the Palaeozoic to early Mesozoic tectonic evolution of northern China and Central Asia along the Solonker Suture.