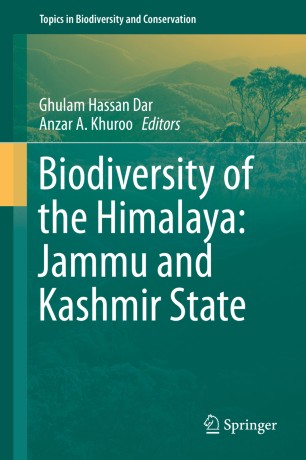 Biodiversity of the Himalaya: Jammu and Kashmir State

Part of the Topics in Biodiversity and Conservation book series (TOBC, volume 18)

The Himalaya, a global biodiversity hotspot, sustains about one-fifth of the humankind. Nestled within the north-western mountain ranges of the Himalaya, the Jammu and Kashmir (J&K) State harbours more than half of the biodiversity found in the Indian Himalaya. The wide expanse of State, spread across the subtropical Jammu, through the temperate Kashmir valley, to the cold arid Ladakh, is typical representative of the extensive elevational and topographical diversity encountered in the entire Himalaya.

This book, the most comprehensive and updated synthesis ever made available on biodiversity of the J&K State, is a valuable addition to the biodiversity literature with global and regional relevance. The book, arranged into 7 parts, comprises of 42 chapters contributed by 87 researchers, each of whom is an expert in his/her own field of research. The precious baseline data contained in the book would form the foundation for assessing current status of knowledge about the bioresources, identify the knowledge gaps, and help prioritization of conservation strategies to steer the sustainable use of biodiversity in this Himalayan region. Given the breadth of topics covered under the banner of biodiversity in this book, it can surely serve as a model for documentation of biodiversity in other regions of the world. The book will be of immense value to all those who, directly or indirectly, have to deal with biodiversity, including students, teachers, researchers, naturalists, environmentalists, resource managers, planners, government agencies, NGOs and the general public at large.

Professor Ghulam Hassan Dar, an eminent plant taxonomist, is widely known for his significant research contributions to the biodiversity of Kashmir Himalaya. In more than 40 years of teaching and research career, Prof. Dar has to his credit 200 research publications (including 10 books) and supervised 27 Ph. D. and M. Phil. students. A Fellow of Indian Association for Angiosperm Taxonomy and awardee of its Prof. Y. D. Tiagi Gold Medal, he has also been recipient of International Fellowship of the Danish Academy of Sciences, Denmark. He has successfully completed several extramural research projects and attended numerous national and international conferences. In pursuit of research and academic collaboration, he has visited many foreign countries. He has held the positions of Head Department of Botany at University of Kashmir, Srinagar, Director CBS, Dean School of Biological Sciences and prestigious Mahatma Gandhi Chair on Ecology & Environment at BGSB University, Rajouri, India.

Dr Anzar A. Khuroo is currently working as Senior Assistant Professor at Centre for Biodiversity & Taxonomy, Department of Botany, University of Kashmir, Srinagar, Jammu and Kashmir (J&K), India. His main areas of research interest include taxonomy, ecology and biodiversity. He has completed many extramural projects and published 90 research papers in reputed journals. He is recipient of young scientist award by Department of Science & Technology, J&K Government and visiting scientist fellowship to Institute of Botany, Chinese Academy of Sciences, Beijing by Indian National Science Academy. He has served as Country Editor (India) for IUCN-led Global Register of Introduced and Invasive Species, and is presently serving as Associate Editor for the journal Conservation Science and Section Editor (Botany) for Checklist. He has decade long teaching experience at post-graduation level and also coordinates Massive Online Open Course on Plant Systematics, hosted by Consortium for Educational Communication, University Grants Commission, India.