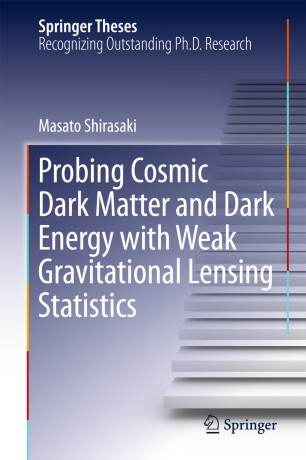 In this book the applicability and the utility of two statistical approaches for understanding dark energy and dark matter with gravitational lensing measurement are introduced.For cosmological constraints on the nature of dark energy, morphological statistics called Minkowski functionals (MFs) to extract the non-Gaussian information of gravitational lensing are studied. Measuring lensing MFs from the Canada–France–Hawaii Telescope Lensing survey (CFHTLenS), the author clearly shows that MFs can be powerful statistics beyond the conventional approach with the two-point correlation function. Combined with the two-point correlation function, MFs can constrain the equation of state of dark energy with a precision level of approximately 3–4 % in upcoming surveys with sky coverage of 20,000 square degrees.
On the topic of dark matter, the author studied the cross-correlation of gravitational lensing and the extragalactic gamma-ray background (EGB). Dark matter annihilation is among the potential contributors to the EGB. The cross-correlation is a powerful probe of signatures of dark matter annihilation, because both cosmic shear and gamma-ray emission originate directly from the same dark matter distribution in the universe. The first measurement of the cross-correlation using a real data set obtained from CFHTLenS and the Fermi Large Area Telescope was performed. Comparing the result with theoretical predictions, an independent constraint was placed on dark matter annihilation. Future lensing surveys will be useful to constrain on the canonical value of annihilation cross section for a wide range of mass of dark matter.