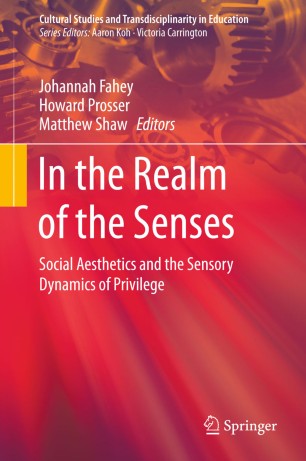 In the Realm of the Senses

Social Aesthetics and the Sensory Dynamics of Privilege

This book charts new territory both theoretically and methodologically. Drawing on MacDougall’s notion of social aesthetics, it explores the sensory dimensions of privilege through a global ethnography of elite schools. The various contributors to the volume draw on a range of theoretical perspectives from Lefebvre, Benjamin, Bourdieu, Appadurai, Kress and van Leeuwen to both broaden and critique MacDougall’s original concept. They argue that within these elite schools there is a relationship between their ‘complex sensory and aesthetic environments’ and the construction of privilege within and beyond the school gates.

Understanding the importance of the visual to ethnography, the social aesthetics of these elite schools  are captured through the inclusion of a series of visual essays that complement the written accounts of the aesthetics of privilege. The collection also includes a series of vignettes that further explore the sensory dimension of these aesthetics:  touch, taste—though metaphorically understood— sight and sound. These varying formats illustrate the aesthetic nature of social relations and the various ways in which class permeates the senses. The images from across the different schools and their surroundings immerse the reader in these worlds and provide poignant ethnographic data of the forces of globalisation within the context of elite schooling.