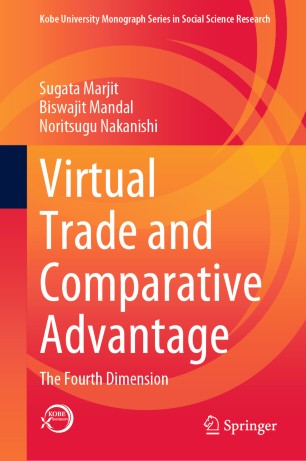 The main purpose of this book is to expose economics graduate students and researchers to the most significant development in international trade that has taken place in the recent past. Service transactions now make up a sizeable portion of global trade. Trade in both final and intermediate inputs is done virtually through information and communication networks, raising afresh the question of the basis of trade and calling for in-depth investigation. This book succinctly comes up with a relatively new explanation for the basis of trade, thus it adds a new dimension to three existing building blocks: technology, endowment, and returns to scale.

Against a backdrop of standard Ricardian and Heckscher–Ohlin competitive models of trade, the chapters of this book nicely introduce the issue of communication cost and the difference in time zones between two trading nations. Then follow many intricate phenomena such as informality, skill formation, growth, wage inequality, and decisions regarding foreign direct investment (FDI). However, imperfectly competitive models are not dealt with in great detail as they deserve more space than can be allotted to them here. Given the nonexistence of any research-oriented in-depth analyses of competitive trade models with time-zone differences, this book is a valuable addition to the resources available to researchers and policymakers interested in deciphering recent developments in global trade patterns and the subsequent welfare effect.

Noritsugu NAKANISHI: Noritsugu Nakanishi is a professor of economics and the current dean of the Graduate School of Economics, Kobe University, Japan. After receiving his Doctor of Economics degree from Kobe University in 1991, he joined the faculty of Kobe University as a lecturer and was promoted to full professor in 2004. He is a member of the Japan Society of International Economics (JSIE), which is an academic association of experts in international economics and related fields in Japan. He won the Kojima Kiyoshi Prize of the JSIE in 2014. In the JSIE, he has held various executive positions such as manager, secretary-general, and standing director over the years, and  he was elected to serve as its president from 2016 through 2018. He now is an advisor of the JSIE.

Since 2010, Dr. Nakanishi and his colleagues have been engaged in two consecutive research projects that focus on the roles of time-zone differences in international trade. The first project was entitled “Fragmentation, Time Zones, and Their Dynamic Consequences,” which was initiated and led by the late Professor Toru Kikuchi. It began in 2010 and lasted five years. After Prof. Kikuchi’s passing in 2011, Dr. Nakanishi took over as project leader, continuing and bringing the project to complete. In 2016, he initiated a new five-year project entitled “Time Zones, Offshoring, Economic Growth and Dynamics.” Both projects have been financially supported by the Japan Society for the Promotion of Science: Grant-in-Aid (A) 22243024 and Grant-in-Aid (A) 16H02016.

Sugata MARJIT: Sugata Marjit, a Gold Medalist of Calcutta University, received his Ph.D. in Economics from the University of Rochester (U.S.A.) in 1985 under the supervision of Prof. Ronald W. Jones. He is currently the Reserve Bank of India Professor of Industrial Economics at the Centre for Studies in Social Sciences, Calcutta (CSSSC); External Fellow of The Leverhulme Centre for Globalization and Economic Policy at the University of Nottingham; Fellow of CES-Ifo, Munich, Germany; Project Director of the Centre for Training and Research in Public Finance and Policy, India; and a member of the State Planning and Public Policy Board, Government of West Bengal. He is a former vice chancellor of Calcutta University, former chairman of the State Council of Higher Education, and a former director of CSSSC. He received the Mahalanobis Gold Medal of the Indian Econometric Society and the VKRV Rao National Prize as a young social scientist, among only three to receive both awards. Recently he has been nominated as a distinguished (University-wide) visiting fellow of the Queen Mary University of London.

Biswajit MANDAL: Biswajit Mandal teaches economics at Visva-Bharati University, Santiniketan, India. Prior to joining Visva Bharati University he worked at Balughat College as assistant professor in economics. He completed his B.Sc. and M.Sc. from the University of Calcutta, India. He earned his Ph.D. from the Centre for Studies in Social Sciences, Calcutta, India, and received a national scholarship from the Government of India and a junior research fellowship from the University Grants Commission. He has also been honored with a Japan Society for the Promotion of Science (JSPS) Fellowship to visit Kobe University, Kobe, Japan. He was a visiting C. V. Raman Fellow at the Department of Economics of the University at Albany-SUNY, Albany, NY, USA. He also taught at the Soka University, Tokyo, Japan. His primary area of research is international trade and development. Very recently his research interests have expanded from trade and development to health economics and applied econometrics in health economics.

“This excellent book is very timely. … In addition to being an excellent source for role of time in international trade, this book provides a great toolkit that may be used in future research to answer various research questions that deal with the role of time in the trade.” (Reza Oladi, Indian Economic Review, Vol. 55, 2020)