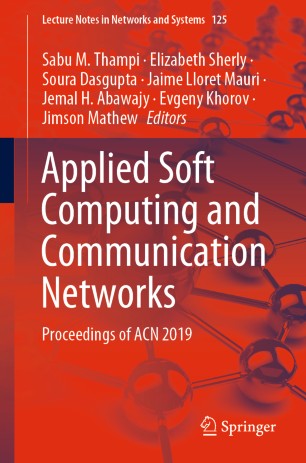 Part of the Lecture Notes in Networks and Systems book series (LNNS, volume 125)

Sabu M. Thampi is a Professor at Indian Institute of Information Technology and Management - Kerala (IIITM-K), Technopark Campus, Trivandrum, Kerala State, India. He has completed Ph.D in Computer Engineering from National Institute of Technology Karnataka. Sabu has several years of teaching and research experience in various institutions in India. His current research interests include sensor networks, Internet of Things (IoT), cognitive computing, affective computing, social networks, nature inspired computing, image forensics and video surveillance. He has authored and edited few books published by reputed international publishers and published papers in academic journals and international and national proceedings. Sabu has served as Guest Editor for special issues in few international journals and program committee member for many international conferences and workshops. He has co-chaired several international workshops and conferences. He has initiated and is also involved in the organization of several annual conferences/symposiums. Sabu is currently serving as Editor for Journal of Network and Computer Applications (JNCA), Elsevier and Journal of Applied Soft Computing, Elsevier; and Associate Editor for IEEE Access and International Journal of Embedded Systems, Inderscience, UK; and reviewer for several reputed international journals. Sabu is a Senior Member of IEEE and member of IEEE Communications Society, IEEE SMCS, and Senior Member of ACM. He is the founding Chair of ACM Trivandrum Professional Chapter.

Elizabeth Sherly received her Ph.D in Computer Science from University of Kerala in 1995, currently working as Senior Professor (HAG) at Indian Institute of Information Technology and Management-Kerala (IIITM-K). She served as the Director of the institute in 2009-2012. Having more than 30 years of experience in teaching and research in Computer Science, her major research work involves Cloud Computing and Machine Learning. She predominantly works in the areas of Medical Image Processing, Natural Language Processing and Automatic Speech Recognition System using Machine Learning and Soft computing techniques. Her Ph.D thesis work was in Artificial Neural Networks in Biological Control Systems now produced Eleven PhDs and actively guiding number of Ph.D Students. She is actively working on promoting virtual learning system with a pedagogy model of Technology Enhanced learning to the Educational Community. Cloud Computing and Marine Wireless Networks and surveillance are her other passionate areas. In Cloud Computing, she works for data replication, migration strategies in SaaS systems. She has been served/serving the Executive Board Member and Technical/Expert member of several Government and Central Government bodies and Editorial Board member of several International and national Journals. Acclaimed with several awards and fellowships which include EURECA (UK) fellowship, Rational Certified (India) Trainer, one among 7 scientists in India for e-Science Grid Group (London) etc. She is the Chief Investigator of two prestigious MeitY projects, Government of India sponsored projects of TDIL (Technology Development in Indian Languages) and one another MICRONet project of ITRA, Media Lab Asia, GOI. Established and heading two centres, Virtual Resource Centre for Language Computing (VRCLC) and Center of Excellence in Pattern and Image Analysis (CEPIA), where Language computing research and Image Processing development using Machine Intelligence are carrying out. More than 100 papers in her credit which includes international, national and conference papers. Her work on Circular Mesh based shape descriptors of MRI breast images for lesion identification had been filed for patent. Editorial member of several journals and conference proceedings, Life Member of CSI, member of IEEE, ACM Chapters, co-authored one book and book chapters also.

Soura Dasgupta is a Professor of Electrical and Computer Engineering at the University of Iowa, U.S.A. He is a past Associate Editor of the IEEE Transactions on Automatic Control, IEEE Control Systems Society Conference Editorial Board, and the IEEE Transactions on Circuits and Systems-II. He is a co-recipient of the Gullimen-Cauer Award for the best paper published in the IEEE Transactions on Circuits and Systems for the calendar years of 1990 and 1991, and a member of the editorial boards of the International Journal of Adaptive Control and Signal Processing, and the EURASIP Journal of Wireless Communications. He received the University Iowa Collegiate Teaching award in 2012. In the same year he was selected by the graduating class for an award on excellence in teaching and commitment to student success. In 1993 he was a selected as a US National Science Foundation Presidential Faculty Fellow, an award given annually to 15 early career engineers and 15 early career scientists for excellence in research and teaching. His present research interests are in Distributed communications, multi-agent control,
compressed sensing and stability in aggregate computing. He was elected a Fellow of the IEEE in 1998.

Jaime Lloret Mauri received his B.Sc+M.Sc. in Physics in 1997, his B.Sc.+M.Sc. in electronic Engineering in 2003 and his Ph.D. in telecommunication engineering (Dr. Ing.) in 2006. He is a Cisco Certified Network Professional Instructor. He worked as a network designer and administrator in several enterprises. He is currently Associate Professor in the Polytechnic University of Valencia. He is the Chair of the Integrated Management Coastal Research Institute (IGIC) and he is the head of the "Active and collaborative techniques and use of technologic resources in the education (EITACURTE)" Innovation Group. He is the director of the University Diploma “Redes y Comunicaciones de Ordenadores” and he has been the director of the University Master "Digital Post Production" for the term 2012-2016. He has been Internet Technical Committee chair (IEEE Communications Society and Internet society) for the term 2013-2015. He has authored 22 book chapters and has more than 380 research papers published in national and international conferences, international journals (more than 140 with ISI Thomson JCR). He has been the co-editor of 40 conference proceedings and guest editor of several international books and journals. He iseditor-in-chief of the “Ad Hoc and Sensor Wireless Networks” (with ISI Thomson Impact Factor), the international journal "Networks Protocols and Algorithms", and the International Journal of Multimedia Communications, IARIA Journals Board Chair (8 Journals) and he is (or has been) associate editor of 46 international journals (16 of them with ISI Thomson Impact Factor). He has been involved in more than 400 Program committees of international conferences, and more than 150 organization and steering committees. He leads many national and international projects. He is currently the chair of the Working Group of the Standard IEEE 1907.1. He has been general chair (or co-chair) of 38 International workshops and conferences. He is IEEE Senior and IARIA Fellow.

Jemal H. Abawajy is a full professor at school of Information Technology, Faculty of Science, Engineering and Built Environment, Deakin University, Australia. He was awarded the higher doctoral degree, Doctorate of Science (DSc.) in 2016, by Deakin University for my outstanding research achievements. He is a Senior Member of IEEE Computer Society; IEEE Technical Committee on Scalable Computing (TCSC); IEEE Technical Committee on Dependable Computing and Fault Tolerance and IEEE Communication Society. Jemal’s leadership is extensive spanning industrial, academic and professional areas. He has served on the Academic Board, Faculty Board, IEEE Technical Committee on Scalable Computing Performance track coordinator, Research Integrity Advisory Group, Research Committee, Teaching and Learning Committee and Expert of International Standing Grant and external PhD thesis assessor. Prof. Abawajy has delivered more than 50 keynote addresses, invited seminars, and media briefings and has been actively involved in the organization of more than 200 national and international conferences in various capacity including chair, general co-chair, vice-chair, best paper award chair, publication chair, session chair and program committee. He has also served on the editorial-board of numerous international journals and currently serving as associate editor of the International Journal of Big Data Intelligence and International Journal of Parallel, Emergent and Distributed Systems. He has also guest edited many special issues. Prof. Abawajy is actively involved in funded research supervising large number of PhD students, postdoctoral, research assistants and visiting scholar in the area of Cloud Computing, Big Data, Network and System Security,Decision Support System, and E-healthcare. He is the author/co–author of five books, more than 250 papers in conferences, book chapters and journals such as IEEE Transactions on Computers and IEEE Transactions on Fuzzy Systems. He also edited 10 conference volumes.

Evgeny Khorov received his BS and MS degrees with honors from MIPT in 2008 and 2010, respectively, and PhD degree in Telecommunications from IITP RAS in 2012. His PhD thesis focused on Quality ofService (QoS) provisioning in multihop wireless networks. Evgeny Khorov is also a recipient of MoscowGovernment Prize for Young Scientists (2013) for in-depth study of channel access in wireless multi-hop networks. Currently, Evgeny Khorov is the Head of Wireless Networks Lab, IITP RAS, established within Megagrant Project led by Prof. Ian Fuat Akyildiz. Evgeny Khorov has developed numerous mathematical models of networking protocols and designed several algorithms and protocols, which are described in over 80 papers, two of which were evaluated with the Best Paper Awards from IEEE ISWCS (2012) and Elsevier Computer Communications (2018). Evgeny has also received Scopus Award Russia (2018). Evgeny has led many national and international projects sponsored by academia foundations (RSF, RFBR, Ministry of Science and Education, Government) and industry. For breakthrough results of the joint projects, in 2015, 2017 and 2018 Huawei awarded him as the Best Cooperation Project Leader. Evgeny Khorov is also a voting member and contributor of IEEE 802.11 that develops and standardizes Wi-Fi. In 2015-2016, he designed several improvements, which were included in the 802.11ax standard aka high efficiency WLANs. In 2015 he studied technologies for the Internet of Things as a Visiting Research Fellow in King's College London. In 2016 Evgeny Khorov received Russian Government Prize in Science and Technology for Young Scientists for remarkable results of research and development of wireless networks. As a Deputy Head of Department and Associate Professor at MIPT, Evgeny Khorov is responsible for the Telecommunication Program. He supervises BS, MS, and PhD students. Two of his students, Vyacheslav Loginov and Alexey Kureev, have received awards at telecommunication Olympiads. Apart from that, Evgeny Khorov has developed a novel courses on Wireless Networking Protocols. Evgeny Khorov gives keynotes &tutorials and participates in panels at large conferences (incl. IEEE Globecom 2017, IEEE PIMRC 2017, IEEE ICC 2016, ISWCS 2014, NEW2AN 2018, etc.). He is a TPC Chair of IEEE Globecom 2018 Workshop on Cloudified Architectures for 5g abd beyond Systems, IEEE BlackSeaCom 2019, Executive Chair of WiFlex 2013. He serves as an expert of Russian Academy of Sciences and Russian Science Foundation, and also as an editor for Ad Hoc Networks.

Jimson Mathew is currently an Associate Professor and Head of the Department in the Computer Science and Engineering, Indian Institute of Technology Patna, India. He received the Masters in computer engineering from Nanyang Technological University, Singapore and the Ph.D. degree in computer engineering from the University of Bristol, Bristol, U.K. He has held positions with the Centre for Wireless Communications, National University of Singapore, Bell Laboratories Research Lucent Technologies North Ryde, Australia, Royal Institute of Technology KTH, Stockholm, Sweden and Department of Computer Science, University of Bristol, UK. His research interests include fault-tolerant computing, computer arithmetic, Machine Learning, and IoT Systems and cognitive radio systems.