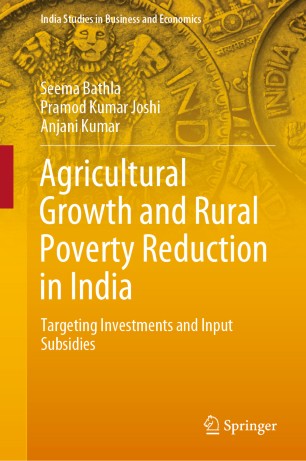 This book provides a blueprint for the allocation of public expenditures “in” and “for” agriculture at the dis-aggregated state level and suggests a reorientation in favour of disadvantaged regions where the marginal returns on additional investments would be higher. It provides insights into the inter-linkages between public expenditures, private investment, rural poverty, and agriculture productivity from a regional perspective to reflect upon spatial differences in the welfare effects of various investments, subsidies, and policies. The book focuses on agricultural growth and rural poverty reduction through public and private investments, non-farm employment, and other pathways to the formulation of appropriate policies at the dis-aggregated state level. It presents new evidence based on advanced econometric tools for analysing and understanding the relationship between public and private investments in agriculture and input subsidies (fertilizer, power, irrigation, and credit) together with their impacts at the dis-aggregated state level. The book also deliberates on  an income based direct support system for farmers as an alternative to the existing input price subsidy regime.  Accordingly, the book offers valuable insights not only for researchers working on poverty alleviation, rural economy, and agricultural growth, but also for policymakers.

Seema Bathla is a Professor, CSRD, JNU, New Delhi. Before joining the JNU, she worked at the Institute of Economic Growth, The Energy Research Institute and Delhi University. She obtained her M.Phil. from Delhi School of Economics and her Ph.D. from the JNU. She has 27 years of work experience and has published four books (three co-authored) and more than 45 research articles in refereed national and international journals. With a keen interest in agricultural issues, she has conducted several studies and undertaken assignments for the World Bank, IFPRI, UNCTAD, WWF-India, and IASRI. She was conferred the Jawaharlal Nehru Award for Outstanding Postgraduate Agricultural Research by the Indian Council of Agriculture Research, New Delhi, in 2008. She is also the recipient of the Dr. R.T. Doshi award for best paper published in Agricultural Economics Research Review in 2014 and 2015, and the Dr. A K Sen award for the best book published in 2018.