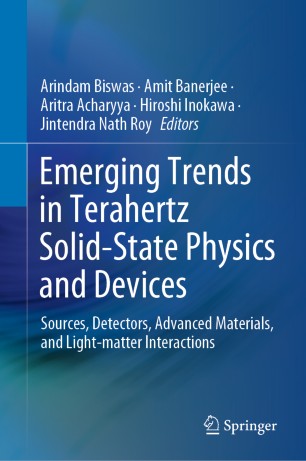 Dr. Arindam Biswas received his M.Tech. in Radio Physics and Electronics from the University of Calcutta, India, in 2010, and Ph.D. from NIT Durgapur, in 2013. He was a Postdoctoral Researcher at Pusan National University, South Korea, under the prestigious BK21PLUS Fellowship. He was a Visiting Professor at Research Institute of Electronics, Shizuoka University, Japan. Currently, Dr. Biswas is working as an Assistant Professor in the School of Mines and Metallurgy, Kazi Nazrul University, Asansol, West Bengal, India. His research interests are in the area of carrier transport in low-dimensional systems and electronic devices, nonlinear optical communications and THz semiconductor sources.

Dr. Amit Banerjee received his Ph.D. in Semiconductor Technology from the Energy Research Unit, Indian Association for the Cultivation of Science, Kolkata, India. He joined the Advanced Device Research Division, Research Institute of Electronics, Shizuoka University, National University Corporation, Japan, as a Scientific Researcher in 2016 and was also part of the Innovative Photonics Evolution Research Center at Hamamatsu, Japan. He later joined the Microelectronic Technologies & Devices, Department of Electrical and Computer Engineering at the National University of Singapore. His current work is on Terahertz Technology, including THz devices (sensors and sources) fabrication, materials engineering and optimization for surveillance, inspection, biomedical, imaging and deep space exploration applications.

Dr. Aritra Acharyya obtained his Ph.D. from the Institute of Radio Physics and Electronics, University of Calcutta. He is currently working as an Assistant Professor in the Department of Electronics and Communication at Cooch Behar Government Engineering College, West Bengal. His research interests are in the area of high-frequency semiconductor devices.

Prof. Hiroshi Inokawa received his Ph.D. in Electrical Engineering from Kyoto University, Japan. In 1985, he joined the Atsugi Electrical Communications Laboratories, Nippon Telegraph and Telephone Corporation (NTT), Kanagawa, Japan. Since then, he has been engaged in the research and development of scaled-down CMOS devices and silicon single-electron devices. During the course of his research, he invented the basic structure of FinFET and single-electron multiple-valued logic. In 2006, he became a Professor of the Research Institute of Electronics, Shizuoka University, Hamamatsu, Japan, where he has been studying nanodevices for advanced circuits and systems.

Dr. Jitendra Nath Roy received his Ph.D. in Physics from Vidyasagar University, India. Presently, he is working as a Professor and Dean (science) in the Department of Physics at Kazi Nazrul University, Asansol, West Bengal, India. His current research interest is in terahertz optical asymmetric demultiplexer (TOAD) based switch in computing, communication and control.

“The title covers a very vast audience from basic science to engineering and technology experts and learners. This can eventually work as a textbook for engineering students or science masters programs and for researchers.” (Christian Brosseau, Optics & Photonics News, osa-opn.org, October 29, 2020)
Buy options