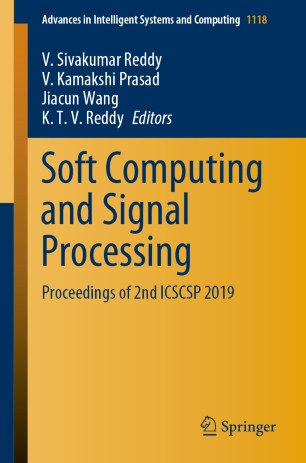 Part of the Advances in Intelligent Systems and Computing book series (AISC, volume 1118)

V. Kamakshi Prasad completed his Ph.D. in speech recognition at the Indian Institute of Technology Madras and his M.Tech. in Computer Science & Technology at Andhra University in 1992. He has more than 20 years of teaching and research experience. His areas of research and teaching interest include speech recognition and processing, image processing, pattern recognition, ad-hoc networks and computer graphics. He has published several books, chapters, research papers in peer-reviewed journals and conference proceedings. He is also an editorial board member of the International Journal of Wireless Networks and Communications and a member of several academic committees.

Jiacun Wang received a Ph.D. in Computer Engineering from Nanjing University of Science and Technology (NJUST), China, in 1991. He is currently a Professor at the Computer Science and Software Engineering Department at Monmouth University, West Long Branch, New Jersey. From 2001 to 2004, he was a member of scientific staff at Nortel Networks in Richardson, Texas. Prior to joining Nortel, he was a research associate at the School of Computer Science, Florida International University (FIU) at Miami and an Associate Professor at NJUST. He has published numerous books and research papers and is an Associate Editor of several international journals. He has also served as program chair, program co-chair, special sessions chair and program committee member for several international conferences. He is the secretary of the Organizing and Planning Committee of the IEEE SMC Society and has been a senior
member of IEEE since 2000.

K T V Reddy, an Alumni of IIT Bombay, is presently working as a Campus Director and Principal, Pravara Educational Society’s “Pravara Technical Education Campus, SirVisvesvaraya Institute of Technology (SVIT) Nashik”. He was the former Director at PSIT Kanpur. During his teaching career at Fr C Rodrigues Institute of Technology (FCRIT), Vashi, he cultivated, promoted and developed the Dept. of ET to the extent that it started being considered as one of the best institutes under University of Mumbai. His systematic approach in documentation helped FCRIT to get its due accreditation. He introduced post-graduation courses at Terna Engineering College, Nerul, and Padmabhusan Vasantdada Patil Prathishan’s College of Engineering, Sion, Mumbai, as its Principal. He published over 100 papers in the national and international journals and conferences, delivered over 200 invited talks and organized over 150 conferences/workshops. Dr. Reddy is a fellow member of IETE, senior member of IEEE and life member of ISTE, ACM, and CSI. He has organized several international and national conferences/workshops.