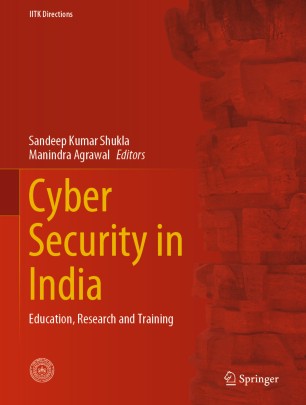 This book of 'directions' focuses on cyber security research, education and training in India, and work in this domain within the Indian Institute of Technology Kanpur. IIT Kanpur's Computer Science and Engineering Department established an ‘Interdisciplinary Center for Cyber Security and Cyber Defense of Critical Infrastructures (C3I Center)’ in 2016 with funding from the Science and Engineering Research Board (SERB), and other funding agencies. The work at the center focuses on smart grid security, manufacturing and other industrial control system security; network, web and data security; cryptography, and penetration techniques. The founders are involved with various Indian government agencies including the Reserve Bank of India, National Critical Information Infrastructure Protection Center, UIDAI, CCTNS under home ministry, Ministry of IT and Electronics, and Department of Science & Technology. The center also testifies to the parliamentary standing committee on cyber security, and has been working with the National Cyber Security Coordinator's office in India. Providing glimpses of the work done at IIT Kanpur, and including perspectives from other Indian institutes where work on cyber security is starting to take shape, the book is a valuable resource for researchers and professionals, as well as educationists and policymakers.

Sandeep Kumar Shukla is currently the Poonam and Prabhu Goel Chair Professor and Head of the Computer Science and Engineering Department, Indian Institute of Technology, Kanpur, India. He is the Editor-in-Chief of ACM Transactions on Embedded Systems and an Associate Editor of ACM Transactions on Cyber-Physical Systems. He is an IEEE fellow, an ACM Distinguished Scientist, and served as an IEEE Computer Society Distinguished Visitor from 2008 to 2012, and as an ACM Distinguished Speaker from 2007 to 2014. He was previously an Associate Editor of IEEE Transactions on Computers, IEEE Transactions on Industrial Informatics, IEEE Design & Test, IEEE Embedded Systems Letters, and various other journals. He was a member of the faculty at the Virginia Polytechnic Institute, Arlington, Virginia, between 2002 and 2015, and has also been a visiting scholar at INRIA, France, and the University of Kaiserslautern, Germany.  In 2014, he was named a fellow of the Institute of Electrical and Electronics Engineers (IEEE) for his contributions to applied probabilistic model checking for system design. He has authored several books on systems and has edited and co-authored numerous books with Springer.

Prof. Manindra Agrawal received his B.Tech. and Ph.D. in Computer Science and Engineering from the Indian Institute of Technology, Kanpur in 1986 and 1991, respectively. He was a fellow of the School of Mathematics, SPIC Science Foundation, Chennai, from 1993 to 1995, and a Humboldt fellow at the University of Ulm, Germany, from 1995 to 1996. He joined the faculty at IIT Kanpur as an Assistant Professor at the Department of Computer Science and Engineering in 1996. And was appointed as the N. Rama Rao Chair Professor in 2003. He is the recipient of several international awards, including the Fulkerson Prize 2006 and the Gödel Prize 2006, and has published and presented papers in respected journals. He was the Head of the Computer Science and Engineering Department, and Dean of Faculty affairs at IIT Kanpur. Currently, he is the Deputy Director and Officiating Director of IIT Kanpur. Prof. Agrawal has made significant contributions to the theory of efficient reactions between computational problems, which are part of the program studying the well-known P vs NP question in mathematics/computer science. His joint paper with two of his former students resolves the centuries-old problem of a fast test of primality. In the language of complexity theory, they have proved that recognizing primes is in the ‘class P’ and this constitutes one of the most striking problems now known in this class.