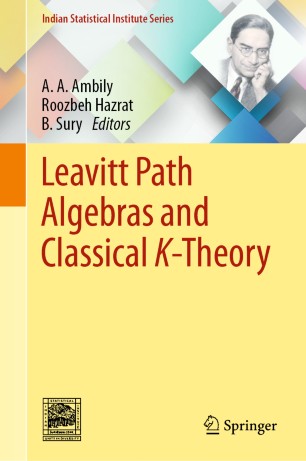 The book offers a comprehensive introduction to Leavitt path algebras (LPAs) and graph C*-algebras. Highlighting their significant connection with classical K-theory—which plays an important role in mathematics and its related emerging fields—this book allows readers from diverse mathematical backgrounds to understand and appreciate these structures. The articles on LPAs are mostly of an expository nature and the ones dealing with K-theory provide new proofs and are accessible to interested students and beginners of the field.  It is a useful resource for graduate students and researchers working in this field and related areas, such as C*-algebras and symbolic dynamics.

A. A. Ambily is Assistant Professor at the Department of Mathematics, Cochin University of Science and Technology, Kerala, India. She holds a Ph.D. in Mathematics from the Indian Statistical Institute, Bangalore Center, India. Her research interests include algebraic K-theory and noncommutative algebras such as Leavitt path algebras and related topics.

Roozbeh Hazrat is Professor at the School of Computer, Data and Mathematical Sciences, Western Sydney University, Australia. He obtained his Ph.D. in Mathematics from the University of Bielefeld, Germany, in 2002. His research interests include Leavitt path algebras, algebraic K-theory and noncommutative algebra. He has authored three books, including Mathematica®: A Problem-Centered Approach published by Springer, and contributed over 50 papers in respected journals. In 2015, he was awarded a one-year fellowship for experienced researchers by Germany's Alexander von Humboldt Foundation.

B. Sury is Professor at the Statistics and Mathematics Unit, Indian Statistical Institute, Bangalore Center, India. He received his Ph.D. from the Tata Institute of Fundamental Research, Mumbai, India, in 1991. His research interests include algebraic groups over global and local fields, division algebras, and number theory. He has authored three books and published several research papers in leading international journals. An elected fellow of The National Academy of Sciences, India, Prof. Sury is the national coordinator for the Mathematics Olympiad Program in India.