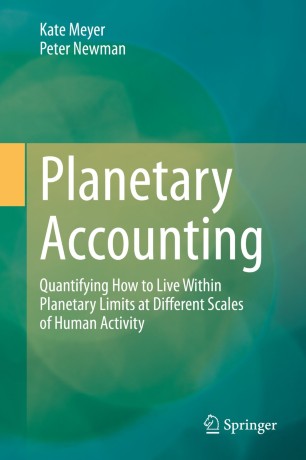 This book presents a novel way to enable people, regardless of their scale of influence, to take responsibility for global environmental problems including climate change. It introduces a new framework called Planetary Accounting, which allows the Planetary Boundaries, non-negotiable limits for the environment, to be translated into limits for human activity. It shows how such limits can be broken down into chunks that can be managed at different levels (from individual and community, to business and sector levels, to cities and regions), and at any level of government.
The book begins by summarising the science of climate change and introducing the notion of the Anthropocene – the “human age”. It highlights the importance of returning to and remaining within the Planetary Boundaries but shows that we can’t realistically do so unless we have a new approach to environmental accounting.
The book then outlines how Planetary Accounting furnishes this new approach by combining sustainability science, change theory, and environmental accounting to create a scalable framework for environmental management that encourages systemic and individual change.
The details of the science of and our human contribution to ten critical human pressures are then presented, and the book concludes with a guide for those seeking to apply Planetary Accounting in practice.
Planetary Accounting could form the scientific underpinning of behaviour change programs, guide the development of policy and regulations, and provide both the basis for environmental laws, and the foundation of future global environmental agreements.
It has been 50 years since the first views from space showed a blue planet alone in our solar system. This book is an historic opportunity to provide humanity for the first time with sufficient information to begin implementing Planetary Accounting.

Kate Meyer graduated from the University of Auckland as the Senior Scholar for Mechanical Engineering with several awards for academic excellence and leadership including the Beca/Rotary Club Scholarship, Composites Association of NZ Prize, Rotary Youth Leadership Awards, and the Maurice Paykel Undergraduate Scholarship. Kate subsequently led sustainable building design teams at Arup in Singapore and Australia, where she guided the environmental design of many award-winning developments. She completed a Sustainable Leadership program at the University of Cambridge, received an Australian Postgraduate Award and an AuDA research grant to develop Planetary Accounting as a PhD at Curtin University, and is currently the Founding Director of the Planetary Accounting Network and Director of Ecometrics.
Peter Newman is the Professor of Sustainability at Curtin University in Perth, Australia. He has written 20 books and over 300 papers on sustainable cities. Peter’s book with Jeff Kenworthy ‘Cities and Automobile Dependence (1989) has been described as ‘one of the most influential planning books of all time’ by Reid Ewing, Professor of City and Metropolitan Planning at the University of Utah.  In 2014 he was awarded an Order of Australia for his contributions to urban design and sustainable transport. Peter has worked in local government as an elected councilor, in state government as an advisor to three Premiers, and in the Australian Government on the Board of Infrastructure Australia and the Prime Minister’s Cities Reference Group. He is a Fellow of the Planning Institute of Australia and the Academy of Technological Sciences and Engineering, is the Co-ordinating Lead Author on Transport for the IPCC’s Fifth Assessment Report, and most recently published the book Resilient Cities: Overcoming Fossil Fuel Dependence. He was the 2018/19 WA Scientist of the Year.