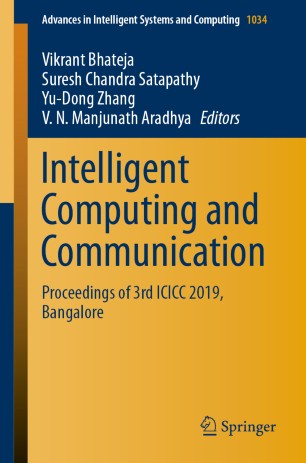 Part of the Advances in Intelligent Systems and Computing book series (AISC, volume 1034)

This book features a collection of high-quality, peer-reviewed papers presented at the Third International Conference on Intelligent Computing and Communication (ICICC 2019) held at the School of Engineering, Dayananda Sagar University, Bengaluru, India, on 7 – 8 June 2019. Discussing advanced and multi-disciplinary research regarding the design of smart computing and informatics, it focuses on innovation paradigms in system knowledge, intelligence and sustainability that can be applied to provide practical solutions to a number of problems in society, the environment and industry. Further, the book also addresses the deployment of emerging computational and knowledge transfer approaches, optimizing solutions in various disciplines of science, technology and healthcare.

Vikrant Bhateja is Associate Professor, Department of Electronics & Communication Engineering, Shri Ramswaroop Memorial Group of Professional Colleges (SRMGPC), Lucknow and also the Head (Academics & Quality Control) in the same college. He is doctorate in Bio-Medical Imaging & Signal Processing and has a total academic teaching experience of 16 years with around 125 publications in reputed international conferences, journals and online book chapter contributions. His areas of research include digital image and video processing, computer vision, medical imaging, machine learning, pattern analysis and recognition. Dr. Vikrant has edited 15 proceeding books/editorial volumes with Springer Nature. He is Editor-in-Chief of IGI Global--International Journal of Natural Computing and Research (IJNCR).  He is also associate editor in International Journal of Synthetic Emotions (IJSE) and International Journal of Ambient Computing and Intelligence (IJACI) under IGI Global press. He is guest editor Special Issues in reputed Scopus/SCIE indexed journals under Springer-Nature: “Evolutionary Intelligence” and “Arabian Journal of Science and Engineering”.

Suresh Chandra Satapathy is a Ph. D in Computer Science, currently working as Professor and at KIIT (Deemed to be University), Bhubaneshwar, Odisha, India. He held the position of the National Chairman Div-V (Educational and Research) of Computer Society of India and is also  a senior Member of IEEE. He has been instrumental in organizing more than 20 International Conferences in India as Organizing Chair and edited more than 30 Book Volumes from Springer LNCS, AISC, LNEE and SIST Series as Corresponding Editor. He is quite active in research in the areas of Swarm Intelligence, Machine Learning, Data Mining. He has developed a new optimization algorithm known as Social Group Optimization (SGO) published in Springer Journal. He has delivered number of Keynote address and Tutorials in his areas of expertise in various events in India. He has more than 100 publications in reputed journals and conf proceedings. Dr. Suresh is in Editorial board of IGI Global, Inderscience, Growing Science journals and also Guest Editor for Arabian Journal of Science and Engg published by Springer.

Yu-Dong Zhang received his Ph. D. degree from Southeast University, China in 2010. He worked as post-doc from 2010 to 2012 and a research scientist from 2012 to 2013 at Columbia University, USA. He served as Professor from 2013 to 2017 in Nanjing Normal University, where he was the director and founder of Advanced Medical Image Processing Group in NJNU. From 2017, he served as Full Professor in Department of Informatics, University of Leicester, UK. His research interests are deep learning in communication and signal processing, medical image processing. He was included in “Most Cited Chinese researchers (Computer Science)” from 2015 to 2018. He won “Emerald Citation of Excellence 2017”, and “MDPI Top 10 Most Cited Papers 2015”. He was included in Top Scientist list in “Guide2Research”. He is now the editor of Scientific Reports, Journal of Alzheimer‟s Disease, International Journal of Information Management, etc. He is the senior member of IEEE and ACM. He has conducted and joined many successful academic grants and industrial projects, such as NSFC, NIH, EPSRC, etc.

V. N. Manjunath Aradhya is currently working as an Associate Professor in the Dept. of MCA, Sri Jayachamarajendra College of Engineering, Mysuru. He received the M.S. and Ph.D degrees in Computer Science from University of Mysore, Mysuru, India, in 2004 and 2007 respectively. He is a recipient of “Young Indian Research Scientist” from Italian Ministry of Education, University and Research, Italy during 2009-2010. His professional recognition includes as a Technical Editor for Journal of Convergence Information Technology (JCIT), Editor Board in Journal of Intelligent Systems, reviewer for IEEE Trans on System, Man and Cybernetics - PART B, Pattern Recognition (PR), Pattern Recognition Letters (PRL) etc.  Also member of program committees of over 45 International Conferences. His research interest includes, Pattern Recognition, Image Processing, Document Image Analysis, Computer Vision, Machine Intelligence, Applications of Linear Algebra for the Solution of Engineering Problems, Biclustering of Gene Expression Data and Web Data Analysis and Understanding. He has published more than 135 research papers in reputed international journals, conference proceedings, and edited books.