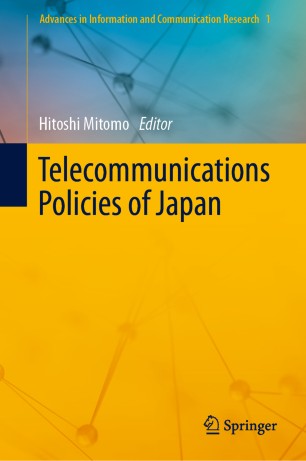 Part of the Advances in Information and Communication Research book series (AICRES, volume 1)

This book provides a detailed description of Japan’s telecommunications policies. It discusses how Japan has addressed a variety of policy challenges ranging from traditional regulatory issues, such as the provision of a universal service, to the latest tasks, including the promotion of cutting-edge technologies.

Japan is a global leader in information and communication technologies (ICT). In addition to technological advances, an impressive nationwide optical-fiber and advanced mobile network infrastructure has been developed, which has boosted the economy and benefited society.

The Ministry of Internal Affairs and Communications (MIC) has played an important role in ICT deployment. Japan has a unique ICT policy framework that does not separate regulation and promotion, unlike many other countries, which have an independent regulator. However, since relatively little information has been provided in English, it has been difficult to learn much about Japan’s policies. Written by specialists from MIC, industry and academia, this is the first collaborative work to provide a comprehensive discussion of Japan’s ICT policies, allowing readers to gain an understanding of the topic.