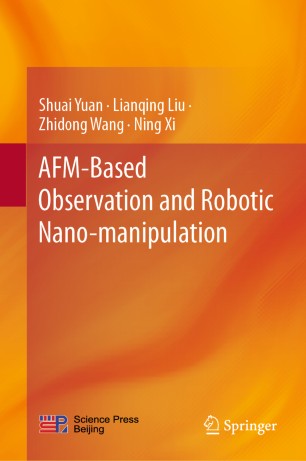 This book highlights the latest advances in AFM nano-manipulation research in the field of nanotechnology. There are numerous uncertainties in the AFM nano-manipulation environment, such as thermal drift, tip broadening effect, tip positioning errors and manipulation instability. This book proposes a method for estimating tip morphology using a blind modeling algorithm, which is the basis of the analysis of the influence of thermal drift on AFM scanning images, and also explains how the scanning image of AFM is reconstructed with better accuracy. Further, the book describes how the tip positioning errors caused by thermal drift and system nonlinearity can be corrected using the proposed landmark observation method, and also explores the tip path planning method in a complex environment. Lastly, it presents an AFM-based nano-manipulation platform to illustrate the effectiveness of the proposed method using theoretical research, such as tip positioning and virtual nano-hand.

Shuai Yuan, Ph.D., graduated from Shenyang Institute of Automation, Chinese Academy of Sciences, and is currently an Associate Professor at Shenyang Jianzhu University. He has presided over a number of projects, such as the National Natural Youth Science Foundation of China, National Post-doctoral Special Foundation of China, National Post-doctoral General Foundation of China, Natural Science Foundation of Liaoning Province, and Liaoning College and University basic Scientific Research Fund. He has also participated in the National High Technology Research and Development Program of China, the key project of the National Natural Science Foundation of China, and multiple projects of provincial or municipal Natural Science Funds. Prof. Yuan has published more than 50 papers in national and international scientific journals and conferences, and a textbook. He has served as a chairman for international conferences including IEEE-CYBER (2016), IEEE-Nanomedicine (2016), IEEE-CYBER (2017), and IEEE-WRC (2018), and also a reviewer for conferences and international journals such as IEEE-ROBIO and IEEE-CYBER. At present, he is investigating micro/nano manipulation, image processing and pattern recognition, and robot navigation and control.
Lianqing Liu received the B.S. degree in industry automation from Zhengzhou University, Zhengzhou, China in 2002, and the Ph.D. degree from the Shenyang Institute of Automation, Chinese Academy of Sciences, Shenyang, China in 2009.
He is currently serving as a Professor for the Shenyang Institute of Automation, Chinese Academy of Sciences. His current research interests include nanorobotics, intelligent control, and biosensors. Dr. Liu was awarded the Early Government/Industrial Career Award by the IEEE Robotics and Automation Society in 2011 etc.
Zhidong Wang received the B.S. degree from the Beijing University of Aeronautics and Astronautics, Beijing, China in 1987, and the M.Sc. and Ph.D. degrees in engineering from the Graduate School of Engineering, Tohoku University, Sendai, Japan in 1992 and 1995, respectively.
He is currently a Professor with the Department of Advance Robotics, Chiba Institute of Technology, Chiba, Japan. His current research interests include human–robot interaction and cooperation systems, distributed autonomous robot systems, micro/nano robotics, and application of intelligent robot technologies for the disabled.
Ning Xi received the D.Sc. degree in systems science and mathematics from Washington University in St. Louis, St. Louis, MO, USA in 1993, and the B.S. degree in electrical engineering from the Beijing University of Aeronautics and Astronautics, Beijing, China.
Currently, he is the Chair Professor of Robotics and Automation in the Department of Industrial and Manufacturing System, and the Director of Emerging Technologies Institute of the University of Hong Kong. Before joining the University of Hong Kong, he was the University Distinguished Professor, John D. Ryder Professor of Electrical and Computer Engineering and Director of Robotics and Automation Laboratory at Michigan State University in U.S. He also served as the founding head of the Department of Mechanical and Biomedical Engineering at City University of Hong Kong (2011-2013). His research interests include robotics, manufacturing automation, micro/nano manufacturing, nano sensors and devices, and intelligent control and systems.