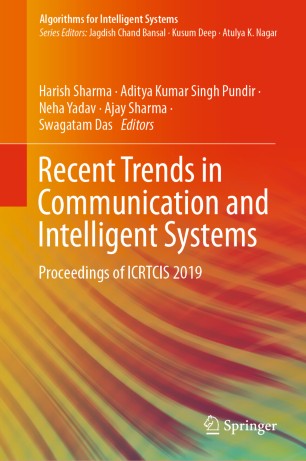 Part of the Algorithms for Intelligent Systems book series (AIS)

The book gathers the best research papers presented at the International Conference on Recent Trends in Communication and Intelligent Systems (ICRTCIS 2019), organized by Rajasthan Technical University Kota, and Arya College of Engineering and IT, Jaipur, on 8–9 June 2019. It discusses the latest technologies in communication and intelligent systems, covering various areas of communication engineering, such as signal processing, VLSI design, embedded systems, wireless communications, and electronics and communications in general. Featuring work by leading researchers and technocrats, the book serves as a valuable reference resource for young researchers and academics as well as practitioners in industry.

Harish Sharma is an Associate Professor at Rajasthan Technical University, Kota, in the Department of Computer Science & Engineering. He has worked at Vardhaman Mahaveer Open University, Kota, and Government Engineering College, Jhalawar. He received his B.Tech. and M.Tech. degree in Computer Engineering from Government Engineering College, Kota, and Rajasthan Technical University, Kota, in 2003 and 2009, respectively. He obtained his Ph.D. from ABV-Indian Institute of Information Technology and Management, Gwalior, India. He is secretary and one of the founder members of Soft Computing Research Society of India. He is a life-time member of Cryptology Research Society of India, ISI, Kolkata. He is an associate editor of “International Journal of Swarm Intelligence (IJSI)” published by Inderscience. He has also edited special issues of the journals “Memetic Computing” and “Journal of Experimental and Theoretical Artificial Intelligence”. His primary area of interest is nature-inspired optimization techniques. He has contributed in more than 45 papers published in various international journals and conferences.

Dr. Pundir has received B.E. degree in Electronics & Communication Engineering from University of Rajasthan, M.Tech. degree in VLSI Design Engineering from Rajasthan Technical University, Kota, India, and Ph.D. in VLSI Testing and Embedded System Design from Poornima University, Jaipur. He is currently working as a Professor in the Department of Electronics and Communication Engineering at Arya College of Engineering & IT, Jaipur. His current research interests are memory testing and built-in self-testing using embedded system design. He is a member of IEEE Electron Device Society and professional member of ACM, life member of ISTE, life member of CSI, India.

Dr. Ajay Sharma did his B.E. from Government Engineering College, Kota (University of Rajasthan), and M.Tech. and Ph.D. from Rajasthan Technical University, Kota. He is presently working as an Assistant Professor in the Department of Electrical Engineering, Government Engineering College, Jhalawar, with more than 12 years of teaching experience. His research area includes soft computing techniques for engineering optimization problems. He has published more than 30 international journals/conference papers and has delivered more than 20 invited talks at the various institutes of repute. He is a life-time member of Institution of Engineers India.

Swagatam Das is currently serving as an Associate Professor at the Electronics and Communication Sciences Unit of the Indian Statistical Institute, Kolkata, India. His research interests include evolutionary computing, pattern recognition, multi-agent systems, and wireless communication. Dr. Das has published one research monograph, one edited volume, and more than 200 research articles in peer-reviewed journals and international conferences. He is the founding co-editor-in-chief of Swarm and Evolutionary Computation, an international journal from Elsevier. He has also served as or is serving as the associate editor of the IEEE Transactions on Systems, Man, and Cybernetics: Systems, IEEE Computational Intelligence Magazine, IEEE Access, Neurocomputing (Elsevier), Engineering Applications of Artificial Intelligence (Elsevier), and Information Sciences (Elsevier). He is an editorial board member of Progress in Artificial Intelligence (Springer), PeerJ Computer Science, International Journal of Artificial Intelligence and Soft Computing, and International Journal of Adaptive and Autonomous Communication Systems. Dr. Das has 15000+ Google Scholar citations and an H-index of 60 till date. He has been associated with the international program committees and organizing committees of several regular international conferences including IEEE CEC, IEEE SSCI, SEAL, GECCO, and SEMCCO. He has acted as guest editor for special issues in journals like IEEE Transactions on Evolutionary Computation and IEEE Transactions on SMC, Part C. He is the recipient of the 2012 Young Engineer Award from the Indian National Academy of Engineering (INAE). He is also the recipient of the 2015 Thomson Reuters Research Excellence India Citation Award as the highest cited researcher from India in Engineering and Computer Science category between 2010 and 2014.