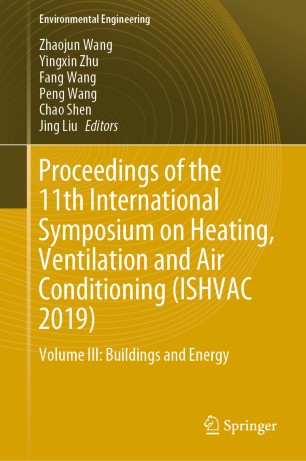 ISHVAC: The International Symposium on Heating, Ventilation and Air Conditioning

Proceedings of the 11th International Symposium on Heating, Ventilation and Air Conditioning (ISHVAC 2019)

This book presents selected papers from the 11th International Symposium on Heating, Ventilation and Air Conditioning (ISHVAC 2019), with a focus on HVAC techniques for improving indoor environment quality and the energy efficiency of heating and cooling systems. Presenting inspiration for implementing more efficient and safer HVAC systems, the book is a valuable resource for academic researchers, engineers in industry, and government regulators.

She serves as a member of the Editorial Board of the journal Building and Environment. She also serves as the reviewer of several international journals including Indoor Air and Building and Environment and Energy and Buildings. She worked as the member of International Scientific Committee and the section chair of Indoor Air 2005, COBEE 2012, ISHVAC 2013, Indoor Air 2014, SuDBE 2015, ISHVAC-COBEE 2015, COLD CLIMATE 2015, IAQVEC 2016, and ISHVAC 2017 international conferences. Her research expertise focuses on thermal comfort, indoor air quality and ventilation, energy-efficient heating system, and building energy analysis. She was supported by the National Natural Science Foundation of China, Province and the Ministry of Education Scientific Research Foundation for the Returned Overseas, etc. She took part in some projects funded by the National Science and Technology Support Key Projects of China and two international programs. She has published three books and over 120 technical papers. She also translated a book.

Yingxin Zhu is a professor and the vice-dean of School of Architecture, Tsinghua University, China. She received B.Sc. and Ph.D. degrees from Tsinghua University in 1984 and 1989, respectively. She worked in Nagoya University, Japan, as a fellow of JSPS (Japan Society of Promoting Science) during 1992–1993 and a guest professor in 2002. Currently, she is the Vice-Head of the Key Lab of Ministry of Education on Eco-Urban Planning and Green Building Research, the Chair of National Steering Committee for Higher Education in HVAC, the Vice-Chair of National Board of Accreditation for HVAC Education, a fellow of ISIAQ Academy, and a fellow of IBPSA. She has served on the editorial boards of several international journals.

Her research interests are sustainable buildings and thermal comfort. She has led a number of important projects funded by the Chinese government including a key NSFC project “Fundamental research on thermal comfort in dynamic thermal environment” and the 11th, 12th, and 13th Five-year National Plan Research Projects on sustainable building. She is a leader (operative agent) of IEA-EBC Annex 69 “Strategy and Practice of Adaptive Thermal Comfort in Low Energy Buildings.” She has published 70 research papers in international journals and over 100 research papers in peer-reviewed journals in Chinese.

Dr. Wang focuses his research on simulation, optimization, fault diagnosis, and reliability serving district heating. Since 2014, he has published 19 technical papers, 2 national codes, and a textbook, District Heating. He is a member of the National Urban Heating Standardization Technical Committee, MOHURD Heating Standardization Technical Committee, and China District Heating Association. He also serves as a reviewer of several international journals, such as Building Simulation and Science and Technology for the Built Environment. He was supported by the National Natural Science Foundation and the Ministry of Education, Science and Technology Development Centre in China.

Chao Shen received his Ph.D. and M.S. degrees from Harbin Institute of Technology (HIT). He was employed as a member of the “Young Talents Plan” of HIT in 2015. Chao worked as a postdoctoral research associate at the University of Illinois at Urbana-Champaign from 2013 to 2016. As a jointly trained Ph.D. student, he studied at the University of Illinois at Urbana-Champaign and the Hong Kong Polytechnic University, respectively. He hosted three research projects including the National Natural Science Foundation of China (Youth Program) and the Natural Science Foundation of Heilongjiang Province. He also participated in 5 research projects including the project RP-1677 funded by ASHRAE, and the project supported by Environment and Conservation Fund of the Government of Hong Kong. He has published 30 research papers with 26 indexed by SCI. He has served as a member of ASHRAE and a reviewer of 8 international academic journals.

Dr. Shen develops creative engineering solutions to problems dealing with performances in heat pumps that used in building energy efficiency. He investigates renewable energy such as solar, waste heat, and technologies that improve the energy efficiency in building environment controls. He also studies how to control and predict the fouling in enhanced heat transfer tubes for operational performance improvement.

Liu Jing is the vice-dean and a professor at the School of Architecture, Harbin Institute of Technology, China. He obtained his B.E. and M.E. degrees from Harbin Institute of Civil Engineering and Architecture. He obtained his Ph.D. degree in Engineering from Tohoku University, Japan. He worked as a visiting assistant research scientist at the Texas A&M University, U.S., during 2008–2009.

Liu Jing's main research interests include the design, prediction, and maintenance technologies for building environment, building energy conservation, and urban smart heating. He is a reviewer for several international academic journals, such as Building and Environment, Energy and Buildings, Applied Energy, Building Simulation, Indoor and Built Environment, and so on. He has published nearly 150 academic papers and 8 books and held 9 national invention patents.