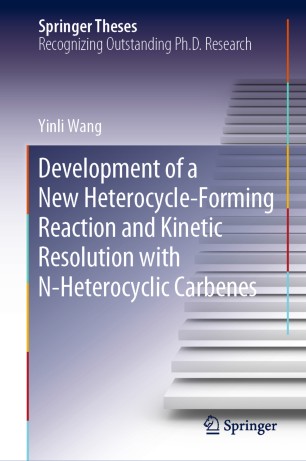 In this book, the author focuses on exploring new organocatalytic transformations under operationally simple and environmentally friendly reaction conditions. Two new types of catalytic reactions promoted by N-heterocyclic carbenes (NHCs) are described. The oxa- and azacycle-forming reactions of sulfonylalkynols and sulfonylalkynamides are broadly considered to be a new type of activation mode in NHC chemistry, wherein the bond formation with internal O- and N-nucleophiles occurs at the γ-position of the propargyl sulfones with 1,2-sulfonyl migration. The resulting oxa- and azacycles are core structures in many biologically significant compounds and medicinally important agents.

In addition, the book develops the chiral NHC-catalyzed kinetic resolution of α-hydroxy carboxylic acid derivatives based on chiral recognition of the substrate–cocatalyst complex. In this carboxylate cocatalyst-assisted chiral acylation, the reaction rate acceleration and selectivity enhancement are interpreted in terms of the reversible complexation of the substrate and carboxylate cocatalyst, which is verified by control experiments and measured using analytical methods. The findings described here reveal a promising new aspect of not only NHC catalysis but also identifying novel catalysis systems.