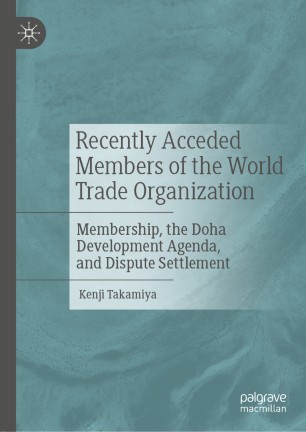 The book sheds light on trade policies of developing economies that joined the multilateral trading system after establishment of the World Trade Organization (WTO) in 1995, once known as the recently acceded members (RAMs). Its detailed case studies on Georgia, the People’s Republic of China, Viet Nam and Ecuador examine their engagement in accession and Doha Round negotiations and, where relevant,  dispute settlement at the WTO. Using the economic theories of trade agreements and negotiations as a guide for intellectual inquiries, this book assesses motivations accounting for the RAMs’ evolving behaviors in the multilateral trading system. The first two chapters present background and overview, followed by four chapters on country-specific case studies. The book is concluded with the last chapter that provides one possible explanation of why the Doha Round has been faced with deadlocks while accession and dispute settlement have been working effectively.
Kenji Takamiya is an economist of a multilateral development bank, specialized in emerging markets, low-income countries, and transition economies. He has Ph.D. in politics and international studies and M.Phil. in international relations, both from the University of Cambridge, as well as M.A. in international and development economics from Yale University.