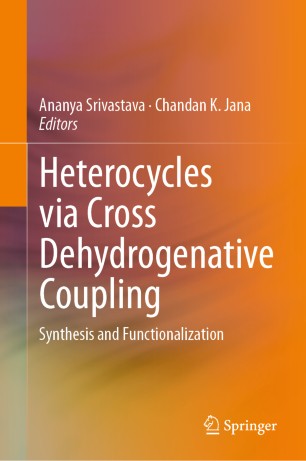 This book discusses the developments in the synthesis and functionalization of different heterocycles based on the formation of carbon-carbon (C-C) and carbon-heteroatom (C-X) bonds using cross-dehydrogenative coupling (CDC). Consisting of 13 chapters, the book systematically describes the advances in the synthesis and functionalization of nitrogen, oxygen, and sulfur-containing heterocycles. It also discusses the various mechanistic pathways to help readers gain an in-depth understanding of the CDC reactions of heterocycles. Lastly, in order to promote green chemistry, it addresses a range of metal-free CDC reactions of heterocycles – an area that has attracted significant attention in both academic and industrial research.

Dr Ananya Srivastava completed her Ph.D. in Synthetic Organic Chemistry at the Department of Chemistry, Indian Institute of Technology Delhi, India. Prior to this, she earned her Master of Science in Chemistry with a gold medal from D.D.U. Gorakhpur University, India. She is currently a scientific officer at the National Institute of Pharmaceutical Education and Research, Guwahati, India. Her highly interdisciplinary research spans a wide range of areas in synthetic organic chemistry, nano-catalysis, material characterization, and nanobiosensors. She has published her work in leading journals and at various conferences and symposiums, including the 2nd International Symposium on C-H Bond Activation, Rennes, France. She has received numerous prestigious awards and fellowships, including JRF and SRF from the Council of Scientific & Industrial Research (CSIR), Government of India, and was an invited visiting scholar at Pusan National University, South Korea under an NRF fellowship. She has also worked with Professor Yoon Bo Shim as a visiting scientist at the Department of Chemistry, PNU, South Korea. She is the editor of the journal Modern Chemistry & Applications, U.S.A., and has completed the Patent Law course at the Nalsar University of Law, Hyderabad, India.

Dr. Chandan K. Jana graduated in Chemistry from Calcutta University in 2002, and received his M.S. in Chemical Science from the Indian Institute of Science Bangalore in 2005. He then completed his Ph.D. in Synthetic Organic Chemistry at the University of Muenster, Germany in 2008. He pursued postdoctoral research at EPEL and the University of Basel, Switzerland, and is currently an Associate Professor at the Indian Institute of Technology, Guwahati, India. His research and teaching interests focus on organic chemistry.