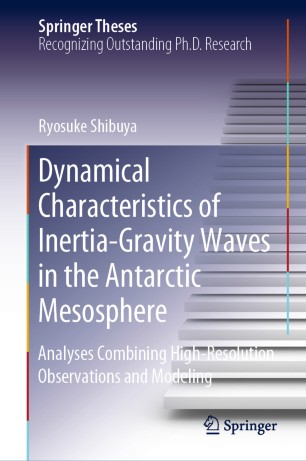 Dynamical Characteristics of Inertia-Gravity Waves in the Antarctic Mesosphere

Ryosuke Shibuya is a Postdoctoral Researcher in the Project Team for HPC Advanced Predictions utilizing Big Data Research Unit for Predictability of Global Weather Extremes, Japan Agency for Marine-Earth Science and Technology (JAMSTEC). He received his B.Sc., M.Sc. and Ph.D. from the University of Tokyo in March 2012, March 2014, and October 2017, respectively. He was awarded the Japan Society for Promotion of Science (JSPS) research fellowship for young scientists, and his research throughout his doctoral program was supported by the JSPS. He has also received a number of prizes and awards: the School of Science Research Award (Master) from the University of Tokyo in 2014, the best student oral presentation award at the American Meteorological Society’s 21th Symposium in 2014, and the School of Science Research Award (Ph.D.) from the University of Tokyo in 2017.