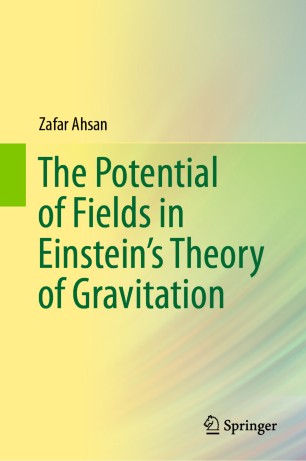 The Potential of Fields in Einstein's Theory of Gravitation

ZAFAR AHSAN is a former Professor at the Department of Mathematics, Aligarh Muslim University, India, where he completed his Ph.D. in Mathematics in 1979. He has previously served as a Visiting Associate at the Inter-University Centre of Astronomy and Astrophysics (IUCAA), Pune (1996–2005); a UGC Visiting Professor at Sardar Patel University, Vallabh Vidyanagar, Anand (2004–2005); and as a Visiting Professor at Universiti Sains Islam Malaysia (October–December, 2016). At present, Prof. Ahsan is a Research Fellow at Institut Sains Islam Malaysia.

Professor Ahsan is a life member of several learned societies including the Indian Association of General Relativity and Gravitation, the Astronomical Society of India, International Electronic Engineering Mathematical Society, and the Tensor Society of India. Further, he has served as Editor-in-Chief of the Aligarh Bulletin of Mathematics (2012–2015), Editor-in-Chief of the Journal of Tensor Society of India (2010–2012) and Managing Editor of the Aligarh Bulletin of Mathematics (1998–2012). He is currently a member of the editorial boards of several journals, including the Global Journal of Advanced Research on Classical and Modern Geometries, the Islamic University of Gaza Journal of Natural and Engineering Studies, and the Bulletin of the Calcutta Mathematical Society and the Journal of the Calcutta Mathematical Society. With over 40 years of teaching experience, he has published five books and over 100 research papers in several international journals of repute. His research interests are in gravitational waves, symmetries of space–time, exact solutions of Einstein equations, tetrad formalisms and differential geometric structures in general relativity. His current research interest, apart from General Relativity and Gravitation, is in the Qur’an, Science and Modern Cosmology.

Professor Ahsan is the President of Anjuman Faroogh-e-Science (Association for Promotion of Science), Aligarh branch; and has been a Council Member of the Indian Association for General Relativity and Gravitation (2002–2006). He is the recipient of the Nishan-e-Azad award (2017) for the promotion of science in Urdu; the International Einstein Award for Scientific Achievement (2011); the Rashtriya Gaurav Award (2007); the Shiksha Rattan Puraskar (2007); and the Best Citizens of India award (2006, 2007, 2008). He is a Member of the Research Board of Advisers, American Biography Institute (USA) and the Life Time President of the Tensor Society of India.

“The book is definitely written in the style and notation familiar to the physicist community and might be useful for young physicist students who want to rapidly access a practical knowledge on the Lanczos potential method.” (Gabor Etesi, zbMATH 1434.83002, 2020)