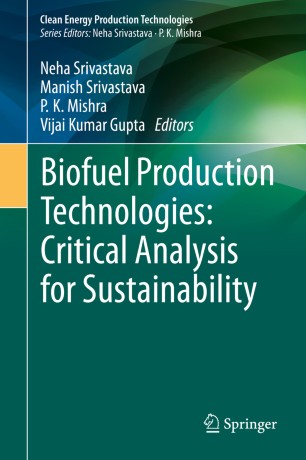 Production and utilization of sustainable energy toward maintaining a clean environment is a major challenge. At the same time, the continued depletion of fossil fuels and the global dependency on non-renewable fuels is a chief concern. Moreover, the long-term economic and environmental issues associated with the high utilization of fossil fuel, such as global warming, are also important, particularly in the context of the predicted increase in the global population to around 5 billion by 2050.

In recent years, researchers have been investigating alternative, renewable fuels to replace fossil fuels. Of the various options, biofuels are especially attractive due to their low production costs and the fact that they are pollution free. Also known as transportation fuels, their energy is derived from biological resources or through the biological processes. Biofuels such as biohydrogen, biomethane, biogas, ethanol and butanol offer a number of advantages and can be economically produced from cellulosic biomass. As such, they can play a vital role in sustainably meeting future energy demands.

Biofuels have the potential to become a global primary energy source, offering significant reductions in greenhouse gas emissions as well as opportunities to increase economic and social development in rural communities and reduce the problems associated with waste disposal. However, low yields and lack of process technology are some of the aspects that need to be addressed.

This book offers an overview of existing biofuels and the technologies to solve the problems associated with their practical implementation. Evaluating the biofuel options and discussing the opportunities and risks in relation to resources, technologies, practices, markets and policy, it provides insights into the development of economically viable bioenergy industries.

Neha Srivastava is currently working as Post-doctorate fellow in Department of Chemical Engineering and Technology, IIT (BHU) Varanasi, India. She has published 25 research articles in the in peer reviewed journals with 03 patents and have 01 Technology Transfer.  She has been completed her PhD from Department of Molecular and Cellular Engineering, SHIATS, India in 2016 in the area of bioenergy. She has been received 06 Young Scientist Awards. Presently, she is working on biofuels production (Cellulase enzymes; production and enhancement, biohydrogen production from waste biomass, bioethanol production). Field of Expertise: Biofuels production, microbial bioprocessing and enzyme technologies

P. K. Mishra is currently Professor and Head in the Department of Chemical Engineering & Technology, Indian Institute of Technology (BHU), Varanasi, India. He obtained his PhD degree in Chemical Engineering from Institute of Technology (Banaras Hindu University) in 1995. He has authored/co-authored over 60 technical papers published in reputed national/international journals and supervised more than 20 doctoral students. He has received several awards and has 05 patents with 01 Technology Transfer. He is Fellow of Institution of Engineers India. He has received several awards at National/International levels. He has also made significant contribution towards development of entrepreneurship ecosystem in Eastern part of the country. He is coordinator Technology Business Incubator at the Institute and member Executive committee NISBUD, Ministry of Skill Development, Government of India. Field of Expertise: Biofuels production, microbial bioprocessing and enzyme technologies.

Dr. Vijai Kumar Gupta from ERA Chair of Green Chemistry, Department of Chemistry and Biotechnology, School of Science, Tallinn University of Technology, Tallinn, Estonia, is one of the leading experts in the area of microbial biology and biotechnology. He is the member of International Sub-commission on Trichoderma and Hypocrea, Austria; International Society for Fungal Conservation, UK; and Secretary of European Mycological Association. Dr. Gupta is the Fellow of Prestigious- The Linnaean Society, London, UK; Fellow of Indian Mycological Association; and Fellow of Mycological Society of India. He has been honored with several awards in his career including Indian Young Scientist Award for his advanced research achievements in the field of fungal biology and biotechnology. He is the editor of few leading scientific journals of high repute and having many publications in his hands with h-index 21. He has edited many books for publishers of international renown such as CRC Press, Taylor and Francis, USA; Springer, USA; Elsevier Press, The Netherlands; Nova Science Publisher, USA; DE Gruyter, Germany; and CABI, UK.