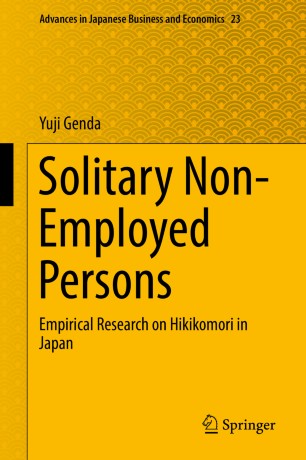 Empirical Research on Hikikomori in Japan

Part of the Advances in Japanese Business and Economics book series (AJBE, volume 23)

This book is devoted to offering a new concept of non-employment caused by social exclusion. Among labor economic studies, it is the first attempt to investigate the conditions of jobless persons who have completely lost opportunities for daily communication with others.

The new concept provided by this book is “solitary non-employed persons (SNEP).” SNEP are defined as non-employed persons who are normally entirely alone or do not spend time with people other than their family. According to a detailed time-use survey in Japan, SNEP make up almost 70 % of single, jobless persons aged 20 to 59. The number of SNEP doubled in the 2000s.

As a serious issue for non-employment, economists and sociologists have focused on long-term unemployed persons and persons “not in education, employment, or training” (NEET), which include discouraged persons resigning from work. These serious non-employment issues are attributable to and further aggravated by the isolation experienced by the SNEP.

Social withdrawal—that is, the hikikomori who stay indoors—is one notable feature of Japanese youth problems in many cases. Large numbers of the middle-aged jobless Japanese also currently shut themselves in their rooms. The objective approach by the SNEP concept enables us to understand the reality of these withdrawn persons who are now growing in number in many countries. A continuous increase in the number of SNEP will cause several difficulties in society and the economy. SNEP will not make their own livings after the deaths of their families, causing social security costs and financial deficits to further accumulate in the efforts to help them. A shortage of an attractive labor force will accelerate in the future due to the expansion of SNEP within the young and middle-aged populations.

This book proposes appropriate policies to prevent an increase in SNEP in such a way as to generate skilled professionals, as well as to reach out and support them. It will contribute to developing studies for jobless people closely involved in social exclusion, and to finding universal and effective solutions for their inclusion.

Yuji Genda is a professor of labor economics at the Institute of Social Science, The University of Tokyo. He earned his Ph.D. in economics at Osaka University. His publications include A Nagging Sense of Job Insecurity—The New Reality Facing Japanese Youth (LTCB International Library Trust, International House of Japan, 2005); Jobless youths and the NEET problem in Japan, Social Science Japan Journal (2007, 10(1)); The endless ice age—A review of the cohort effect in Japan, The Japanese Economy (co-authored, 2008, 35(3)); Long-term effects of a recession at labor market entry in Japan and the United States, Journal of Human Resources (co-authored, 2010, 45(1)); Young, Japanese, and not in education, employment, or training: Japan’s experience with the NEET phenomenon, in Demographic Change and Inequality in Japan (edited by S. Shirahase, 2011, Trans Pacific Press); The solitary non-employed persons (SNEPs): a new concept of non-employment, Japan Labor Review (2014, 10(4)); Does downsizing take a toll on retained staff? An analysis of increased working hours in the early 2000s in Japan, Journal of the Japanese and International Economies (co-authored, 2015, 36); and, An international comparison of hope and happiness in Japan, the UK and the US, Social Science Japan Journal (2016, 18(2)).