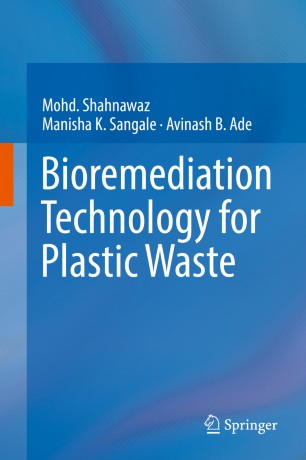 Plastic is one of the widely used polymers around the globe since its discovery.  It is highly impossible to think the ease of life without the aid of plastic. Every year billion tons of plastic waste gets accumulated in the environment and leads to death of both marine and terrestrial animals. Plastic is very durable and needs around 1000 years to degrade under the natural environment.  The present book illustrates the importance and significance of the bioremediation to tackle the problem of plastic waste. Previously, we have reported elite rhizobacterial isolates (Lysinibacillus fusiformis strain VASB14/WL and Bacillus cereus strain VASB1/TS) of Avicennia marina Vierh (Forsk.)  from the West Coast of India with the potential to degrade plastic (polythene). The present book attempted to address the bioremediation scenario of plastic waste (including micro plastic) using microbes with bacteria in particular.     Various strategies used to tackle with the plastic waste were highlighted with case studies of plastic waste management, including in vitro, in situ and ex situ with a special reference to biodegradation technology. After the biodegradation of the plastic using microbes, the generated plastic (polythene) degradation products (PE-DPs) were also documented using GC-MS technique followed by their deleterious effect on both animal and plant systems. The book also enhances the awareness of the plastic-free society and also suggests some alternative materials to be used instead of plastic. Lastly, the book suggests/recommends the strategies to be followed by the lawmakers in the government organizations/non-government organizations/social organizations to frame the regulations and guidelines to implement at mass level to reduce the generation of plastic waste.