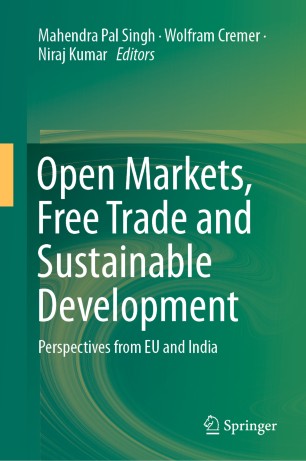 Perspectives from EU and India

This book explores the dilemmas posed by globalisation in various aspects of law. It covers diverse themes, ranging from the impact of different legislative measures, bilateral and regional agreements in the context of trade, investment and mobility of labour, to concerns about sustainability, equity, regional balance and social security in the light of globalisation. Although it focuses mainly on India and the European Union, the issues raised and challenges discussed are of a general nature, and as such relevant in the broader context. The chapters address contemporary problems in trade, investment and labour mobility, which have emerged through the complex interaction of market, state policies and socio-environmental concerns, and are expressed on national and global platforms in the context of evolving legal system. The book is a valuable resource for students, researchers and academics engaged in comparative legal studies, particularly those interested in studying the interplay of globalisation with various areas and aspects of law at national as well as international levels. It also appeals to anyone interested in law and policy studies.

Mahendra Pal Singh is a Professor Emeritus at the University of Delhi and Chair Professor of Comparative Law at National Law University Delhi. He has also served as Vice Chancellor of National University of Judicial Sciences, Kolkata and as Chair of the Delhi Judicial Academy He was a Visiting Professor and fellow at various institutions and universities around the globe and in India. His publications include well over one hundred papers in national and international legal journals and several books. He is the founding editor of the NUJS Law Review and The Indian Yearbook of Comparative Law, and has collaborated in national and international research projects in the area of comparative public law and also directed a project on the nature of the Indian legal system.
Wolfram Cremer is Dean and Chair Professor of Public Law and European Law, at the Faculty of Law, Ruhr University, Bochum, Germany. He is also a Visiting Professor at the Faculty of Law, National University of Singapore. Since 2005, he has been the Director of the Institute for Mining and Energy Law at Ruhr University. He has contributed numerous book chapters and essays and edited several monographs and books. He has also made valuable contributions through commentaries, reviews, case discussions and conference reports.
Niraj Kumar is currently an Assistant Professor at the National Law University Delhi, where he is also the Research director at the Centre for Comparative Law at National Law University, Delhi. He taught at the Faculty of Law, University of Delhi. He has published numerous articles in national and international journals and has presented papers on environmental law, constitutional law and comparative public law at various conferences. His areas of interest are administrative law, constitutional law, environmental law, interpretation of statutes, jurisprudence and comparative law.