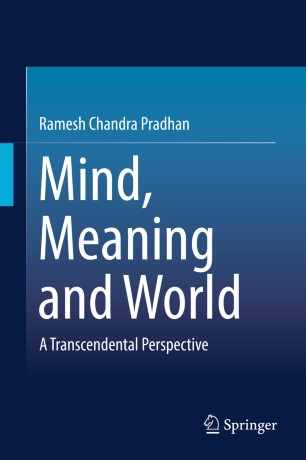 The present book intends to approach the problem of mind, meaning and consciousness from a non-naturalist or transcendental point of view. The naturalization of consciousness has reached a dead-end. There can be no  proper solution to the problem of mind within the naturalist framework. This work intends to reverse this trend and bring back the long neglected transcendental theory laid down by Kant and Husserl in the West and Vedanta and Buddhism in India. The novelty of this approach lies in how we can make an autonomous space for mind and meaning without denying its connection with the world. The transcendental theory does not disown the embodied nature of consciousness, but goes beyond the body in search of higher meanings and values. The scope of this work extends from mind and consciousness to the world and brings the world into the space of mind and meaning with a hope to enchant the world. The world needs to be retrieved from the stranglehold of scientism and naturalism. This book will dispel the illusion about naturalism which has gripped the minds of our generation. The researchers interested in the philosophy of mind and consciousness can benefit from this work.