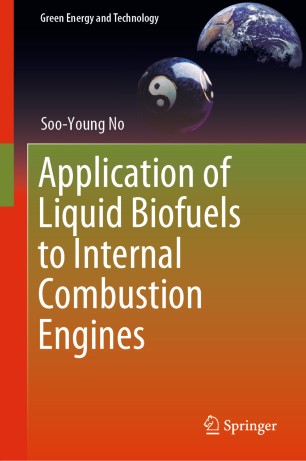 This book provides a comprehensive overview of the application of liquid biofuels to internal combustion (IC) engines. Biofuels are one of the most promising renewable and sustainable energy sources. Particularly, liquid biofuels obtained from biomass could become a valid alternative to the use of fossil fuels in the light of increasingly stringent environmental constraints. In this book, the discussion is limited to liquid biofuels obtained from triglycerides and lignocellulose among the many different kinds of biomass. Several liquid biofuels from triglycerides, straight vegetable oil, biodiesel produced from inedible vegetable oil, hydrotreated vegetable oil, and pyrolytic oil have been selected for discussion, as well as biofuels from lignocellulose bio-oil, alcohols such as methanol, ethanol and butanol, and biomass-to-liquids diesel. This book includes three chapters on the application of methanol, ethanol and butanol to advanced compression ignition (CI) engines such as LTC, HCCI, RCCI and DF modes. Further, the application of other higher alcohols and other drop-in fuels such as DMF, MF, MTHF, and GVL are also discussed. The book will be a valuable resource for graduate students, researchers and engine designers who are interested in the application of alcohols and other biofuels in advanced CI engines, and also useful for alternative energy planners selecting biofuels for CI engines in the future.

Prof. Soo-Young No received his PhD from Mechanical Engineering in Cardiff University, U.K. He is a Professor of Biosystems Engineering in Chungbuk National University. His research focuses on atomization and sprays, combustion and emission characteristics in applying the liquid biofuels to internal combustion engines, particularly compression ignition engines. He was Editor in Chief Asia of International Journal, Atomization and Sprays during 2008-2016.