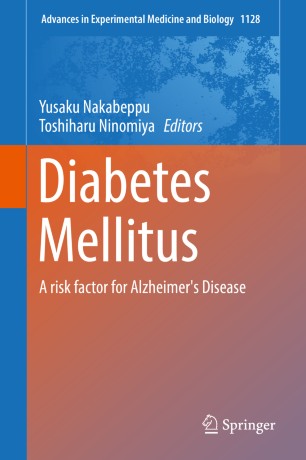 A risk factor for Alzheimer's Disease

Part of the Advances in Experimental Medicine and Biology book series (AEMB, volume 1128)

This book describes the precise mechanisms by which insulin resistance and diabetes mellitus (DM) act as risk factors for Alzheimer’s disease (AD). It opens by discussing the de novo synthesis of insulin in the brain and its functional significance with regard to glucose metabolism and maintenance of neuronal function in the brain. The epidemiological evidence that DM is a risk factor for the development of dementia, including AD as well as vascular dementia, is then examined. Subsequent chapters explore in depth the mechanisms involved in this relationship, including abnormal protein processing, dysregulated glucose metabolism, impaired insulin signaling, and mitochondrial dysfunction. The molecular interactions between diabetes and AD are fully discussed, highlighting the pathological molecular mechanisms induced by diabetes that promote and accelerate AD pathology. Finally, diagnostic biomarkers and potential therapeutic approaches for AD are considered on the basis of the presented evidence. In providing answers to the critical questions of whether and why DM is a risk factor for AD, this book will hold appeal for a wide interdisciplinary audience.