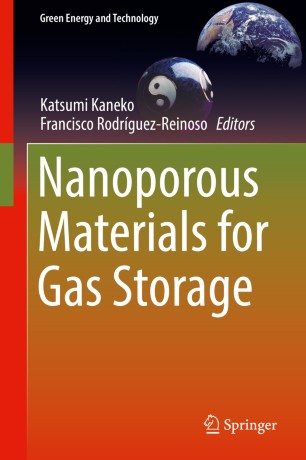 This book shows the promising future and essential issues on the storage of the supercritical gases, including hydrogen, methane and carbon dioxide, by adsorption with controlling the gas-solid interaction by use of designed nanoporous materials. It explains the reason why the storage of these gases with adsorption is difficult from the fundamentals in terms of gas-solid interaction. Also, the example of industrial application of natural gas storage with adsorption is described. It consists of 16 chapters which describe fundamentals, application, key nanoporous materials (nanoporous carbon, metal organic frame works, zeolites) and their storage performance for hydrogen, methane, and carbon dioxide.
Thus, this book appeals to a wide readership of the academic and industrial researchers and it can also be used in the classroom for graduate students focusing on clean energy technology, green chemistry, energy conversion and storage, chemical engineering, nanomaterials science and technology, surface and interface science, adsorption science and technology, carbon science and technology, metal organic framework science, zeolite science, nanoporous materials science, nanotechnology, environmental protection, and gas sensors.

Katsumi Kaneko graduated the master program of Chemistry of the University of Tokyo in 1971 and became a Research Associate of Faculty of Science, Chiba University just after graduation of the master program. Doctor of Science was given for the research carried out in Chiba University from the University of Tokyo in 1978. He became Associate Professor in 1986. He was Professor of Physical Chemistry from 1992 to 2010 in Chiba University. He was invited to Exotic Nanocarbons Project, Japan Regional Innovation Strategy Program by the Excellent, Japan Science and Technology as Distinguished Professor in 2010. He has been Distinguished Professor of Center for Energy and Environmental Science Shinshu University since 2014 after the JST project. He is a world-wide active scientist in adsorption and nanoporous materials science fields. He has developed science on molecules, ions, and materials confined in nanoscale solid spaces. He firstly enveiled in-pore super-high pressure effect of carbon pores and partial dehydration effect of carbon pores for ions, and non-Coulombic structure formation of ions in carbon pores. He has contributed to quantum molecular sieving effect and water adsorption on hydrophobic carbons in addition to pioneering contribution to characterization of nanoscale carbon pores. He published about 500 articles in refereed journals. He was in charge of president of the International Adsorption Society from 2004 to 2007. He is the recipient of the Division Award of the Chemical Society of Japan and the Charles Petinos Award by the American Carbon Society. He is a fellow of the Royal Society of Chemistry, International Adsorption Society, and Chemical Society of Japan.

Francisco Rodríguez-Reinoso obtained his doctorate from Granada University (Spain) in 1967. He did postdoctoral research at Bristol University (UK) and Pennsylvania State University (USA) from 1968 to 1971. He was then Associate professor of Inorganic Chemistry at Granada University until 1981 and since then Professor of Inorganic Chemistry at Alicante University until 2011, where he is now Professor Emeritus. He is a world-recognized leader in the field of carbon materials, with expertise in activated carbon and carbon molecular sieves synthesis, characterization and utilization; carbons for storage of hydrogen, natural gas and carbon dioxide; carbon-supported catalysts, mesoporous carbons and carbon foams; isotropic graphite and its use in structural applications; and carbon-ceramic and carbon-metal composites. He was responsible for over 120 research projects and contracts at the University of Alicante and he has published over 400 articles in refereed journals and has supervised the theses of 51 Ph.D students. He was the founding president of the Spanish Carbon Group in 1991 and he is the recipient of several prestigious awards, including the Japan Carbon Award for Lifetime Achievement (2008), the SGL CArbon Award from the American Carbon Society (2010) and he was the Ubbelohde Lecturer from the British CArbon Group (2013). He was editor of the journal Carbon from 1991 to 2012.