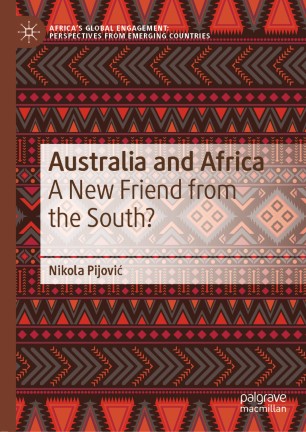 A New Friend from the South?

Australia has presented itself as Africa’s ‘friend from the south,’ without any colonial baggage, and is interested in a long-term partnership for trade and development. In this context, Australia is only one of many ‘new’ players seeking more intensive engagement with Africa since the end of the Cold War. At its core, the book argues that because of its largely unacknowledged ‘flawed’ historical engagement with Africa, as well as the political partisanship driving its fickle and volatile contemporary engagement with the continent, Australia suffers from an inability to assess its strategic and long-term interests – i.e., it doesn’t know what it wants in or from Africa. This makes Australia a rather unique emerging player in Africa: while other 'new' actors' engagement with Africa is generally strategic, and driven to a large extent by a desire to secure resources and counter the influence of geopolitical rivals, Australia’s efforts with regard to Africa are more episodic and not about acquiring resources or countering its rivals. Hence, while immigration, globalization, trade, terrorism, and climate change continue to bring Africa and Australia closer together, Australia’s failure to understand its own interests continues to hamper its engagement with Africa.