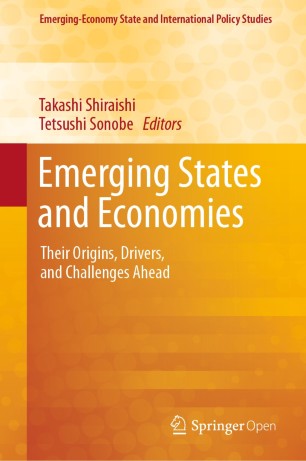 Their Origins, Drivers, and Challenges Ahead

This open access book asks why and how some of the developing countries have “emerged” under a set of similar global conditions, what led individual countries to choose the particular paths that led to their “emergence,” and what challenges confront them. If we are to understand the nature of major risks and uncertainties in the world, we must look squarely at the political and economic dynamics of emerging states, such as China, India, Brazil, Russia, and ASEAN countries. Their rapid economic development has changed the distribution of wealth and power in the world. Yet many of them have middle income status. To global governance issues, they tend to adopt approaches that differ from those of advanced industrialized democracies. At home, rapid economic growth and social changes put pressure on their institutions to change. This volume traces the historical trajectories of two major emerging states, China and India, and two city states, Hong Kong and Singapore. It also analyzes cross-country data to find the general patterns of economic development and sociopolitical change in relation to globalization and to the middle income trap.

Takashi Shiraishi is Chancellor, Prefectural University of Kumamoto. He received his PhD in history from Cornell University and taught at the University of Tokyo, Cornell University, Kyoto University, National Graduate Institute for Policy Studies (GRIPS), and Ritsumeikan University. He served as Executive Member, Council for Science and Technology Policy (CSTP), Cabinet Office, President, GRIPS, and President, Institute of Developing Economies-JETRO. He also served as editor, Indonesia, Cornell Southeast Asia Program and editor-in-chief, nippon.com, a multi-lingual online journal. He was awarded the Medal with Purple Ribbon and designated to the Order of Cultural Merit. He was awarded the Medal of Bintang Jasa Utama from Indonesia. He is the author of three award-winning books: An Age in Motion (Ithaca: Cornell University Press, 1990, Ohira Masayoshi Asia Pacific Award), Indonesia: Kokka to Seiji (Government and politics in Indonesia, Tokyo: Libroport, 1990; Suntory Academic Award), and Umi no Teikoku (Empires of the seas, Tokyo: Chuokoron, 2000; Yomiuri-Yoshino Sakuzo Award). His recent works include Chugoku wa Higashi-Ajia wo Do'o Kaeruka (How is China changing East Asia? Tokyo: Chuo Koron, 2012, co-authored with Caroline Sy Hau), and Kaiyo Ajia vs. Tairiku Ajia (Maritime Asia vs. Mainland Asia, Kyoto: Minerva, 2016).