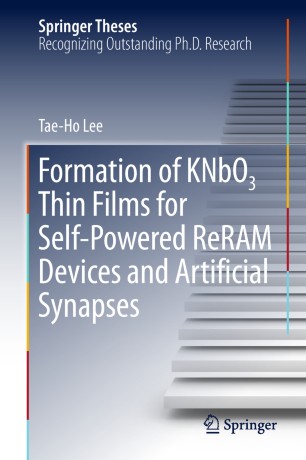 This thesis describes an investigation into homogeneous KN crystalline films grown on Pt/Ti/SiO2/Si substrates, amorphous KN films grown on TiN/Si substrates using the RF-sputtering method, and the ferroelectic and piezoelectric properties of these KN films. KNbO3 (KN) thin films have been extensively investigated for applications in nonlinear optical, electro-optical and piezoelectric devices.  However, the electrical properties of KN films have not yet been reported, because it is difficult to grow stoichiometric KN thin films due to K2O evaporation during growth.

This thesis also reports on the ReRAM properties of a biocompatible KN ReRAM memristor powered by the KN nanogenerator, and finally shows the biological synaptic properties of the KN memristor for application to the artificial synapse of a neuromorphic computing system.