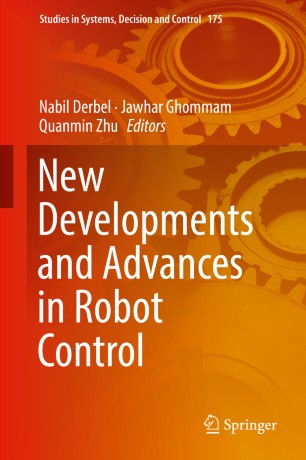 Part of the Studies in Systems, Decision and Control book series (SSDC, volume 175)

Nabil Derbel is Professor in Control Systems Theory at the Electrical Engineering Department of The "National Engineering School of Sfax", University of Sfax, Tunisia. He received his engineering Diploma from the "Ecole Nationale d'Ingénieurs de Sfax" in 1986, the "Diplôme d'Etudes Approfondies" in Automatic control from the "Institut National des Sciences Appliquées de Toulouse" in 1986, the "Doctorat d'Université" degree from the "Laboratoire d'Automatique et d'Analyse des Systèmes de Toulouse" in 1989, and the "Doctorat d'Etat" degree from the" Ecole Nationale d'Ingénieurs de Tunis". His current interests include: Optimal Control, Sliding Mode Control, Complex Systems, Fuzzy Logic, Neural Networks. He is the author and the co-author of more than 80 papers published in international Journals and of more than 500 papers published in international conferences. Currently, Professor Derbel is associate editor of International Journal of Modelling, Identification and Control, the editor of International Journal of Digital Signals and Smart Systems, and co-editor (and co-founder) of Transactions on Systems, Signals & Devices, an International Journal, which has been renamed in 2017 as Advances in Systems, Signals & Devices. He has edited a book for Springer entitled "Applications of sliding mode control", in 2017.

Jawhar Ghommam is an Associate Professor in Control Theory and Robotics at the National Institute of Applied Science and Technology, University of Carthage, Tunis. He's got the BSc degree in Computer and Control Engineering from the National Institute and Applied Sciences and Technology (INSAT) in 2003 in Tunis. He's got the DEA ( MSc) degree form the university of Montpelier at the Laboratoire d'Informatique, Robotique et Micro-électronique (LIRMM, France) in 2004 and later on in 2008 a Ph.D in Control Engineering degree jointly from the National Engineering School of Sfax and the university of Orleans in France. From September 2008 through September 2010 he had the privilege of regularly visiting a distinguished university at the Balearic Islands (Spain), where he served as a research contributor and Senior lecturer on cooperative control algorithms and a lecturer on time delayed systems. He also has the privilege of visiting the GREPCI research group on the basis of two months yearly since 2010. J. Ghommam occupies a permanent research position at the Control Energy Management Laboratory (CEM-Lab) at Sfax-Tunisia. His Research interests include fundamental motion control concepts for nonholonomic/underactuated vehicle systems, nonlinear and adaptive control; intelligent and autonomous control of networked unmanned systems, team cooperation, consensus achievement,and sensor networks. He is the author/coauthor of about 57 technical papers in international journals, and refereed conferences. He serves as a regular referee for many international journals in the led of Control and Robotics.

Quanmin Zhu is Professor in control systems at Department of Engineering Design and Mathematics, University of the West of England, Bristol, UK. He obtained his MSc. in Harbin Institute of Technology, China in 1983 and PhD in Faculty of Engineering, University of Warwick, UK in 1989. His main research interest is in the area of nonlinear system modelling, identification, and control. He has published over 160 papers on these topics and provided consultancy to various industries. Currently Professor Zhu is acting as member of editorial board of International Journal of Systems Science, member of editorial board of Chinese Journal of Scientific Instrument, editor (and founder) of International Journal of Modelling, Identification and Control, and editor of International Journal of Computer Applications in Technology.