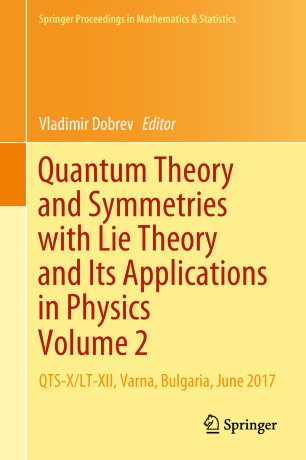 This book is the second volume of the proceedings of the joint conference X. International Symposium “Quantum Theory and Symmetries” (QTS-X) and XII. International Workshop “Lie Theory and Its Applications in Physics” (LT-XII), 19–25 June 2017, Varna, Bulgaria.
The QTS series started around the core concept that symmetries underlie all descriptions of quantum systems. It has since evolved into a symposium on the frontiers of theoretical and mathematical physics. The LT series covers the whole field of Lie Theory in its widest sense together with its applications in many facets of physics. As an interface between mathematics and physics the workshop serves as a meeting place for mathematicians and theoretical and mathematical physicists.
In the division of the material between the two volumes, the Editor has tried to select for the first and second volumes papers that are more oriented toward mathematics and physics, respectively. However, this division is relative since many papers could have been placed in either volume. The topics covered in this volume represent the most modern trends in the fields of the joint conferences: symmetries in string theories, conformal field theory, holography, gravity theories and cosmology, gauge theories, foundations of quantum theory, nonrelativistic and classical theories.