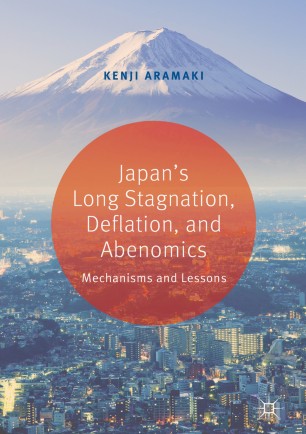 This book examines the struggles of the Japanese economy over the last 30 years, analyzing in detail the formation of the huge economic bubble in the 1980s, its collapse at the beginning of the 1990s, and subsequent two decade long economic stagnation and chronic deflation, with the aim of identifying the mechanism of such processes and drawing lessons for future economic policy management. The book also assesses the comprehensive policy efforts called “Abenomics” under the current Abe administration. As Abe continues into a new term, this book will be of interest to Japan scholars, economists, and policymakers around the world, particularly in Asia.
Kenji Aramaki graduated from Hitotsubashi University with a Bachelor of Arts in Social Studies in 1974 and a Bachelor of Arts in Law in 1976. He was awarded Master of Philosophy in Economics from Oxford University in 1980 and Doctor of Economics in 2001 from Kyoto University. After 30 year-long career at the Ministry of Finance, Government of Japan, including two years as an economist at the IMF, he moved to the University of Tokyo where he taught international economy up to March 2017. He has been teaching at the Tokyo Woman’s Christian University since April 2017. He was a visiting professor at the School of Oriental and African Studies (SOAS), London University from 2014 to 2015.
His publications include “Capital Account Liberalization: Japan’s Experience and Implications for China” in Capital Account Liberalization in China: The Need for a Balanced Approach (2014), “Bretton Woods Institutions and Japan’s Response-Past, Present and the Future” in Glenn D. Hook and Harukiyo Hasegawa’s edited volume Japanese Responses to Globalization (2006), and in Japanese, The Asian Crisis and the IMF (1999) and Risks of Financial Globalization (2018).