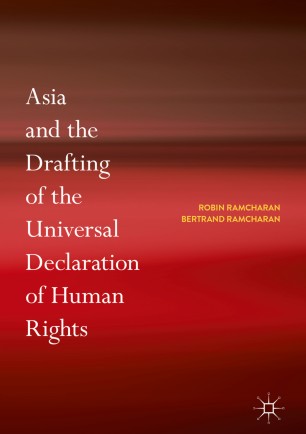 Asia and the Drafting of the Universal Declaration of Human Rights

This is the first book that explicitly outlines Asian contributions to the elaboration of universal human rights values that were proclaimed in the Universal Declaration of Human Rights of 1948. Evidence of Asia’s contribution from the historical records of the Commission on Human Rights (1946 and 1948) profoundly refutes any remnants of the relativist ‘Asian values’ discourse. Asians shaped the ‘new humanism’ of the UDHR and the universal values that they also brought to bear on the drafting of this document. The book brings this evidence into focus in order to enter them into contemporary human rights discourse in Asia. The book coincides with the 70th anniversary (2018) of the UDHR and contributes to the ongoing global dialogue between states and societies in the development of human rights norms. At this time, the elucidation of the Asian contribution in this work is part of this dialogue.
Robin Ramcharan is Professor of International Relations at Webster University Thailand.  He is Executive Director of the Asia Centre, a neutral and independent think-tank in Bangkok that conducts evidence-based research on human rights in Asia. Previously, he was Professor of International Relations and Law at Alliance University, Bangalore. He has worked in international development cooperation with the Academy of the World Intellectual Property Organization.
Bertrand Ramcharan served as High Commissioner for Human Rights until July 2004, following the death of Sergio Vieira de Mello in August 2013. Over his three decades with the UN, he served, inter alia, as Special Assistant to the Director of the Centre for Human Rights. He held many senior positions including Chief Speechwriter of the UN Secretary-General, Director of the Office of the Special Representative for the Secretary-General in UNPROFOR, Director of the International Conference on the Former Yugoslavia, political adviser to the peace negotiators in the Yugoslav conflict, and Director in the United Nations Political Department, focusing on conflicts in Africa.