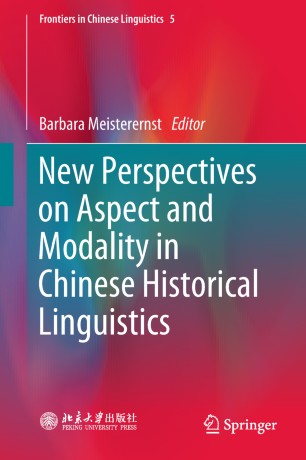 New Perspectives on Aspect and Modality in Chinese Historical Linguistics

This book presents new perspectives on the study of Aspect and Modality in Chinese Historical Linguistics.  Based on the international Workshop on Aspect and Modality in Chinese, the book includes the latest research findings in the field to make them available not only to specialists in Classical and Buddhist Chinese, but also to researchers and students of general linguistics and of the universals of language. It also discusses different aspects of the AM (Aspect-Modality) and the TAM (Tense-Aspect-Modality) system of Chinese. It provides a comprehensive overview of both of the universally related systems of aspect and modality. The first part of the book focuses on aspectual features of Chinese; these include basic studies on the syntactic representation of the aspectual structure of the verb phrase in Archaic Chinese, the aspectual function of different object constructions and their development, temporal features of the verb phrase, and the aspectual functions of no minalization processes. The second part includes articles highlighting different aspects of the modal system or the interplay between tense, aspect and modality in Chinese, including a survey on the history of studies on modality in Chinese and the modal and temporal aspectual/markers indicating future meanings, a specialized study on modal deontic verbs in the Buddhist Vinaya texts, the modal function of rhetorical questions in Buddhist Chinese, and a study on the diachronic development of the aspectual and modal system in Chinese.

​Barbara Meisterernst is presently a research fellow at the Humboldt University Berlin. She received her PhD in Sinology, Germanic Studies and Linguistics at Münster University and her second PhD, the habilitation, at Hamburg University. Before joining the Humboldt University, Berlin, in 2010, she held a post-doc in Paris, taught as a visiting professor at Ghent University, and worked in a digitization project of the Chinese, Tibetan, and Sanskrit Manuscripts at the Berlin-Brandenburg Academy of Humanities in Berlin in collaboration with the International Dunhuang Project, London (IDP). She is an associate member of the Centre de Recherches Linguistiques sur l’Asie Oriantale (CRLAO) and the Centre of Buddhist studies at Ghent University. She teaches and taught Classical Chinese, Chinese linguistics, Buddhist Chinese, History of Grammar, and Silk Road Studies at the Humboldt University, the Technical University Berlin, Hamburg University, Ghent University, and Münster University. She is the author of two books on the grammar of Classical Chinese, co-editor of a book on Chinese linguistics in Europe, editor of a ‘Major Works’ on the Silk Roads (Routledge 2016), and on a collection of articles on Classical Chinese Grammar (Harrassowitz  2016), co-editor of the ‘Routledge Handbook of Applied Chinese Linguistics’, edited by Chu-Ren Huang, Zhuo Jing-Schmidt, and Barbara Meisterernst (to appear 2017). She is the author of around forty articles and book chapters on diachronic studies of the semantics and the syntax of Chinese, on Buddhist Chinese, and on comparative studies of Buddhist translation texts. Her most recent books are Tense and Aspect in Han Period Chinese: A Linguistic Study of the Shǐjì, De Gruyter 2015, New Aspects of Classical Chinese Grammar, Asian and African Studies of the Humboldt University Berlin 45, Wiesbaden: Harrassowitz, 2016 (editor and contributor), as editor: Routledge Major Works Series: The Silk Roads: Critical Concepts in Asian Studies (4 volumes).