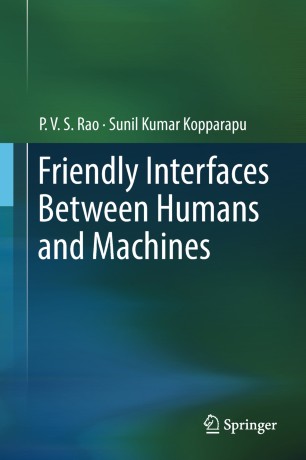 Friendly Interfaces Between Humans and Machines

This book discusses human–machine interactions, specifically focusing on making them as natural as human–human interaction. It is based on the premise that to get the right connect between human and machines, it is essential to understand not only the behavior of the person interacting with the machine, but also the limitations of the technology.

Firstly, the authors review the evolution of language as a spontaneous, natural phenomenon in the overall scheme of the evolutionary development of living beings. They then go on to examine the possible approaches to understanding and representing the meaning and the common aspects of human–human and human–machine interactions, and introduce the keyconcept-keyword (also called minimal parsing) approach as a convenient and realistic way to implement usable human–machine interface (HMI) systems.

For researchers looking for practical approaches, way beyond the realms of theory, this book is a must read.

Dr. Paranandi Venkata Suryanarayana Rao, is an Indian computer scientist, known for his research in the fields of speech and script recognition, who has contributed to the development of TIFRAC, the first indigenously developed electronic computer in India. He is a recipient of various awards, such as the IEEE Third Millennium Medal, Vikram Sarabhai Award, Om Prakash Bhasin Award and the VASVIK Industrial Research Award. The Government of India awarded him the fourth highest civilian honour of Padma Shri in 1987. He graduated in science from Utkal University in 1953 and received a master’s degree in science (Physics) from Banaras Hindu University in 1955. Rao joined Tata Institute of Fundamental Research (TIFR) in the department of computer R&D in 1955 until retirement.  He subsequently built the Cognitive Systems Research Laboratory in the capacity of a research advisor with Tata Infotech. He was also a research advisor to Satyam and Tata Consultancy Services. He obtained a doctoral degree in Physics from the University of Mumbai for his work on the display of text and graphics on computer screens.

Dr. Sunil Kumar Kopparapu obtained his doctoral degree in Electrical Engineering from the Indian Institute of Technology, Bombay, India in 1997. His thesis “Modular integration for low-level and high-level vision problems in a multi-resolution framework” provided a broad framework to enable reliable and fast vision processing. In his current role as a Principal Scientist with the TCS Innovations Labs – Mumbai, he is actively working in the areas of speech, script, image and natural language processing with a focus on building usable systems for mass use in Indian conditions. He has also coauthored a book titled Bayesian Approach to Image Interpretation and more recently a Springer Brief on Non-linguistic Analysis of Call Center Conversation and Analyzing Emotions in Spontaneous Speech in addition to several journal and conference publications; he also holds a number of patents.