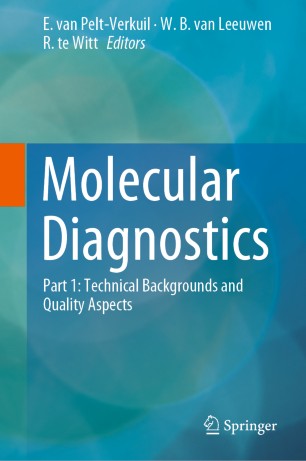 The books Molecular Diagnostics Part 1 and 2 provide a comprehensive and practical overview of the state-of-the-art molecular biological diagnostic strategies that are being used in a wide variety of disciplines.

The editors and experts in their respective fields have combined their knowledge to write these two books. Many years of experience in the development, application and quality control of molecular diagnostic methods is reflected herewith.

Molecular Diagnostics Part 1 is dedicated to the theoretical backgrounds of the technologies often applied in molecular diagnostics, in which nucleic acid amplification methods (such as real-time PCR), sequencing and bioinformatics are the basic tools. The assay design and -development, combined with items of trouble-shooting are described in detail. As a foundation of reliable molecular diagnostic assays, the quality control required for validation, implementation and performance of molecular diagnostic assays is thoroughly discussed. This book also provides extensive information for those working with molecular techniques in a wide variety of research applications using conventional and real-time PCR technology, Sanger and high throughput sequencing techniques, and bioinformatics.

Both full-color and well-illustrated books are particularly valuable for students, clinicians, scientists and other professionals who are interested in (designing) molecular diagnostic methods and for those who wish to broaden their knowledge on the current molecular biological revolution. The information in the books highlights the trend of the integration of multiple (clinical) disciplines into one universal molecular laboratory.

E. van Pelt-Verkuil
Elizabeth van Pelt-Verkuil, born in Rotterdam, The Netherlands has been involved in the development of new techniques in both molecular - and cell biology for more than 40 years. From the first PCRs in 1985 up to now, Elizabeth participated in its development and the applicability in molecular diagnostics. First in pathology, later combined with microbiology. In the meantime her focus changed from research to diagnostics. After graduation in cell biology and biochemistry at University Leiden in 1975, Elizabeth got her PhD on (experimental) developmental biology in 1979, followed by a post-doc position on experimental arteriosclerosis. From 1982 onward, she was a lecturer and applied scientist at the University of Applied Science Leiden for both graduate and post-graduate education in i.e. molecular diagnostics. Elizabeth organised her first theoretical and practical course on PCR and in situ hybridisation for post-graduates in 1987.
Elizabeth was founder of the Centre of Bioscience and Diagnostics in 2001; a department of the before mentioned institute, specialised in post-graduate education. Elizabeth organised and participated in many courses and in-company-trainings on PCR and molecular diagnostics.
During a 5 -year period from 2011 onwards at the Professorship Innovative Molecular Diagnostics at the University of Applied Science Leiden, Elizabeth focused on the implementation and embedding of new laboratory developed qPCR tests for the detection and identification of viral pathogens, including all aspects of quality control. Since 2016 Elizabeth is owner of and consultant at “Quality and Innovations in Molecular Diagnostics”, a company which is specialised in implementation, quality control and education in the field of molecular diagnostics.
Elizabeth van Pelt-Verkuil is a member of the Dutch Society of Medical Microbiology (NVMM) and participates in the Study group of Molecular Diagnostics of Infectious Diseases (WMDI).

Elizabeth van Pelt-Verkuil is editor/author of 2 Dutch books on Molecular Diagnostics and a textbook on PCR.

Since 1996, Willem is a member of the European Society of Clinical Microbiology and Infectious Diseases (ESCMID), Dutch Society of Medical Microbiology (NVMM) and the Study group of Molecular Diagnostics of Infectious Diseases (WMDI).
Willem is an international scientific Expert for diagnostics and subtyping of MRSA for QCMD (Quality Control Molecular Diagnostics) since 2005.
Since 2011, Willem is staff member / instructor of the Dutch National Committee for Medical-Biological Research Training (MMO) in the Netherlands.
Last, but not least, Willem is honorary member of the Iranian Society of Microbiologists since 2010.

Willem is editor/author of multiple books in the field of Molecular Diagnostics:

R. te Witt
René te Witt is born in Rotterdam, The Netherlands and is a real “Rotterdammert”. He studied Medical Microbiology and worked as a technician in a diagnostic laboratory for several years, all in Rotterdam. In 2007 he transferred to the Erasmus MC, also in Rotterdam, to write his thesis “Clinical Microbiological Diagnostics 2.0”. After finishing his PhD in 2012, he took charge of the subunit Molecular Diagnostics at the department of Medical Microbiology and Infectious Diseases of the Erasmus MC. Here, he was responsible not only for the day-to-day routine diagnostics, but also for development and implementation of new molecular assays, quality assurance and research projects,.
During 2012, René started his training to become Medical Molecular Microbiologist (MMM), both at the Erasmus MC and the LUMC in Leiden. In 2015 he graduated as MMM and moved to Rijswijk to work as MMM at NMDL (Netherlands Molecular Diagnostics Laboratory), a service laboratory specialized in molecular diagnostics in medical microbiology, virology and pathology.

René is a member of the Dutch Society of Medical Microbiology (NVMM) since 2007 and is one of the editors of the Netherlands Magazine for Medical Microbiology (NTMM) since 2013.
Furthermore, René is member of and participates in the Study group of Molecular Diagnostics of Infectious Diseases (WMDI) since 2007. René joined the editorial team of this book in 2015 because of his excellent skills and broad experience in modern molecular diagnostics in combination with his current position in a rapid expanding laboratory using state-of-the-art molecular diagnostic techniques.

“This book is intended for anyone working with molecular diagnostics, including ‘research laboratories in many disciplines and for (post)graduate education.’ This is a very broad audience and an accurate assessment of who would be interested. … This is a great book to get you up to speed on the technical fundamentals of molecular diagnostics. I highly recommend it.” (Valerie L Ng, Doody's Book Reviews, September 13, 2019)
Buy options