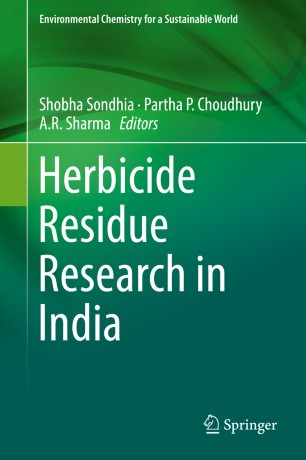 Part of the Environmental Chemistry for a Sustainable World book series (ECSW, volume 12)

Herbicides constitute about 60% of the total pesticides consumed globally. In India, the use of herbicides started initially in tea gardens and picked up in the 1970s, when the high-yielding varieties of rice and wheat were introduced. Presently, 67 herbicides are registered in the country for controlling weeds in crops including cereals, pulses, oilseeds, fibre and tuber crops, and also in the non-crop situations. These chemicals are becoming increasingly popular because of their efficiency and relatively low cost compared with manual or mechanical weeding operations. The contribution of herbicide to total pesticide use, which was only 10-15% during the first decade of the 21st century, has now increased to about 25% with an annual growth rate of 15-20%, which is much higher than insecticides and fungicides. Though the application of herbicides is minimizing yield loss to a great extent, their residues in the food chain and surface and groundwater create some environmental nuisance particularly to non-target organisms.

Research on pesticide residues in India was started during 1970s, when such chemicals were introduced on a greater scale along with high-yielding variety seeds, irrigation and chemical fertilizers for increasing food production. However, the herbicide residue research was not given much emphasis until 1990s. The Indian Council of Agricultural Research initiated a national level programme known as All India Coordinated Research Project on Weed Management through the NRC-Weed Science as the main centre along with some centers of ICAR Institutes and state agricultural universities. Over the last two decades, adequate information was generated on estimation, degradation and mitigation of herbicide residues, which were documented in annual reports, bulletins, monographs and scientific articles. However, there was no consolidated compilation of all the available information providing a critical analysis of herbicide residues. Accordingly, an effort has been made in the publication to compile the available information on herbicide residues in India. This is the first report of its kind which presents the findings of herbicide residues and their interactions in the biotic and abiotic environment. There are 16 chapters contributed by the leading herbicide residue scientists, each describing the present status of herbicide use, crops and cropping systems, monitoring, degradation and mitigation, followed by conclusions and future lines of work.

This book will be useful to the weed scientists in general and herbicide residue chemists in particular, besides the policy makers, students and all those concerned with the agricultural production in the country.